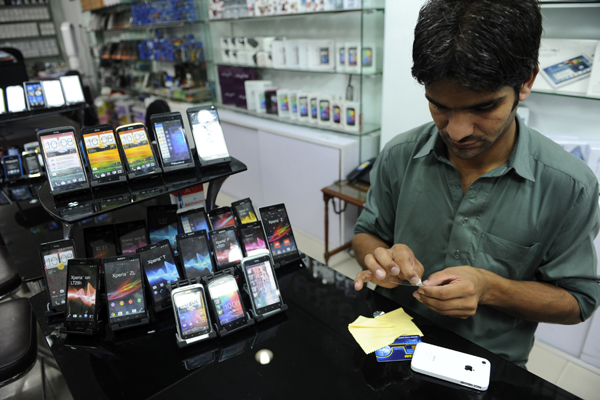 Auction stage of process due April 23.

The first stage of Pakistan’s 3G/4G-spectrum sale process on April 14 exceeded projections of the federal government by $100 million, a source in the Ministry of IT told Newsweek on Wednesday.

Four telecom operators put in base-price bids totaling $1.3 billion. The federal government had estimated receipts of $1.2 billion from the spectrum sale during the current fiscal year. The companies have already deposited $200 million as earnest money with the government.

“Since demand is higher than supply, we will proceed to Stage Two on April 23,” said the Ministry source, asking not to be identified by name. “The $1.3 billion is now locked in. The second stage, when the auction happens, will allow the government to build on this further.”

The source declined to offer any estimate for the final figure from the spectrum sale.

The four bidders will be required to pay 50 percent of their final offer upfront to receive a license from the Pakistan Telecommunication Authority. They will have the option to pay the remainder over five years. To encourage timely payments, the Ministry has made bidders accept a late-payment penalty of 3 percent plus LIBOR per year.

The previous government had estimated receipts of between $500 million and $700 million from the 3G/4G-spectrum process.

Following yesterday’s report from Reuters that claimed the spectrum-sale process had failed to garner the response the government had expected, the Supreme Court today expressed confidence in the sale process and directed that it continue unimpeded. The IT and finance ministries as well as the PTA have strongly refuted the wire story. PTA is expected to serve a legal notice on the media organization later this month.

Anusha Rahman Khan, the minister of state for IT, spelled out the life-changing impact of 3G/4G for Pakistan in Newsweek last week. The move to 3G/4G is expected to add an estimated 1.8 percent to GDP, according to a recent study, through major infrastructure investments and create an estimated 1 million jobs.

Meanwhile, notices have been issued for an inter-ministerial meeting on April 30 over the YouTube ban. As directed by the Lahore High Court, the committee led by Khan, the minister of state for IT, will make recommendations and submit them to the court. The next hearing is likely in mid-May. YouTube was banned by the previous government led by the Pakistan Peoples Party.

some people tried to stop 3G but now things are getting clear. That’s why it is important to view and judge the source. Government and specially minister for IT is showing great interest and this is great achievement.

I am keen observer of 3G//4G auction and IT graduate citizen of Pakistan.

By Virtue of God It is good news for IT & telecom Professional ,a huge opportunities are coming as GOVT is going to auction 3G/4G under the directives of the Supreme court of Pakistan on 23/04/2014.Which is great achievement by PML(N) GOVT.How ever we can not ignore war footing efforts by Minister of State for IT Ms. Anusha Rahman ,Chairman PTA ,Media and other higher officials for 3G/4G auction.This is the time to appreciate GOVT that every thing is going transparent regarding 3G/4G auction.

At the End i would Like to say all speculation and propaganda against the GOVT has come to end.I hope that GOVT will continue all those initiatives which are in favor of Nation and Pakistan.In this regard the News Week Pakistan has set good example for all media by doing good reporting in favor of Pakistan ,which is very beneficial for the Economic growth of Pakistan.

No doubt Pakistan is going to enter the new era of telecom services in next few days. This PML N government is taking keen interest in launching the 3G and 4G spectrum. After that mobile user will enjoy the fast internet and video streaming, crystal clear voice and much more.

It will generate heavy revenue. this will be helpful in this scenario.

Great Initiative by the PTA and Govt of Pakistan

Great move by PTA….Pakistan is near to get new NGN. THE BEST i must say