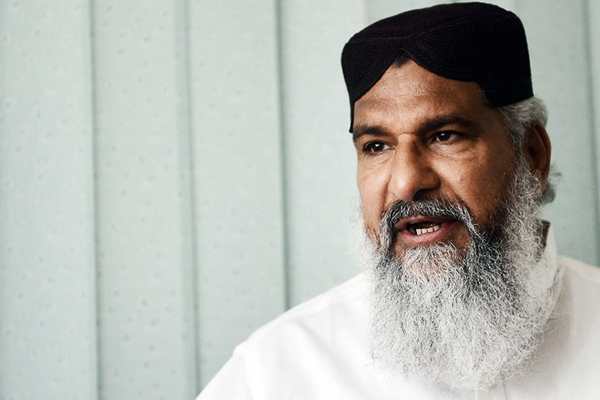 An unrepentant enemy of the Shia community hopes to make it to the National Assembly.

A terrorist to his enemies, a man of peace to his supporters, Maulana Ahmad Ludhianvi heads Pakistan’s largest anti-Shia group, Ahle Sunnat Wal Jamaat, which has been described as the political front of the terrorist group Lashkar-e-Jhangvi.

“At the moment I can raise a voice for my anti-Shia mission only at a local level and from my local mosque. But when I get the microphone in the [National] Assembly, the whole nation and the whole world will listen,” says Ludhianvi.

He is part of a coalition led by cleric Maulana Sami-ul-Haq, “Father of the Taliban,” having said he was dumped by the Pakistan Muslim League (Nawaz) in favor of his archrivals, the local feudal Akram family. Sheikh Waqas Akram narrowly defeated Ludhianvi in 2008, but after he was exposed for faking several of his degrees, his father is standing in what will be a tight race between the old power of the feudals and the rising threat of sectarianism.

Ludhianvi’s Jamaat movement denies any link to violence, despite being known as the political arm of Jhangvi, one of the most active terror groups in Pakistan, bent on exterminating the 20 percent Shia minority. Jhangvi claimed responsibility for the two worst bomb attacks so far this year which killed 182 people in Shia areas of Quetta. It is also linked to Al Qaeda. Rights groups say attacks on the Shia hit a record high in 2012.

Jhang, one of the most important towns in central Punjab province, elects four seats to the National Assembly and is the birthplace of sectarian terrorism. Jhangvi precursor, extremist group Sipah-e-Sahaba, was founded in the town in 1985, and the head of Jamaat always lives in Jhang. Ludhianvi was formerly a Sahaba leader.

PMLN, the biggest party in the province, has long been accused of aligning with hardliners as a way of cementing its power. It is tipped to win Saturday’s elections and form a national government. Ludhianvi says the party has cut him off and backed Akram’s father, Sheikh Muhammad Akram. But Sen. Mushahidullah Khan of the PMLN says: The “Jamaat has never been our ally. We never wanted to give them tickets. It is all propaganda that they are our allies.”

The narrow streets outside Ludhianvi’s home are filled with posters and graffiti supporting him, exhorting strict Muslim laws, and denouncing the Shia. Long-bearded and soft-spoken, Ludhianvi goes nowhere without gun-toting bodyguards clad in black shalwar kameez. He calls on religious groups to unite to “save” Pakistan as an Islamic Sunni republic. His supporters liken their struggle to that against Ahmadis, a minority community declared non-Muslim in 1974 and stripped of other rights.

The Akrams, who made their wealth in transportation, talk of a progressive, tolerant Pakistan, of the economy, not sectarian hatred. Although Maulana Azam Tariq, the then-head of Sahaba, won the seat in 2002 from jail, when he was assassinated a year later Sheikh Waqas Akram won the by-election. Waqas, 39, won again in 2008. But both victories were narrow and the constituency remains hotly contested. Waqas claims to have survived 12 assassination attempts in the past 10 years, including four suicide attacks. He is accompanied everywhere by four to five gunmen.

“There are only two types of votes in Jhang: Sipah-e-Sahaba and anti-Sipah-e-Sahaba,” Waqas says at his fortress-style home. “I still remember in the late ’80s and early ’90s when they were the biggest dons of this area. They used to kill people and string up their bodies on the road to give a message to others. They used to extort money from everybody. The only way to put an end to extremism in Pakistan is to exclude these elements from mainstream politics and political influences,” he says.

But the competition is tough and analysts say it will be a close race. Zargham Abbas, 35, a former local councilor, said “most sensible” people support the Akram family because of their moderate views. “There has been peace in this town for the last 10 years,” he said. “People want a balanced society and to get rid of fanaticism.” But grocer Muhammad Nadeem Qasmi, 43, is a die-hard Ludhianvi supporter. “The agenda of the Jamaat to bring Islamic legislation to defend the dignity of Islamic figures is quite justified. We are hoping for victory,” he said.

I’m a shia and I’m accepting that our so called ayatollah’s made our deen very difficult even for us, we are going far away from Allah from Rasool e Pak from Ahle Bait from companions of Rasool e Pak. I don’t know why we can’t accept reality of Islam and till when we will believe on unauthentic stories made by someone which is even unknow for our ayatollah and for our real shias alims. We don’t even follow Mola Ali, we don’t even follow hazrat Husnain karemain, we don’t even listen and follow imam Bakar and imam Sadiq..
Where we r going I don’t know, where is our original shia scholars gone..
May Allah guide us and guide all, may Allah protect us and all from Shirk which is the biggest sin in front of Allah.

Where is the state? where is the law? where is the Judicary? where is the scruitny of condidates by Election Commission of Pakistan? How and Why the world-wide known terorist leaders are running their election compaign? Is this free, fair, fair and just election? The terriorists who must be hanged or impriosned in Jail are going now to represent and legislate in the Higheist constitutional Institutions…………..

@Hassan Abbas-Tehrik-e-Nifaz-e-Fiqh-e-Jafria (Movement for the implementation of Jafri Law) was formed in 1979 in a country which as per Shia estimates is 80% Sunni…..isn’t the name seething of SECTARIANISM…….TNFJ changed its name to Tehreek-e-Jafria Pakistan which was banned in 2002……Today it goes by the name Islami Tehreek with which PPP has formed an electoral alliance which was announced in a press conference attended by Yousuf Raza Gilani and Raja Pervez Ashraf

In 1979 Shia’s Terrorist banned group Tehrik e Nifaz-e-Fiqah-e-Jafaria surrounded the parliament of Pakistan to implement shia’s Fiqqah in Pakistan, this is the biggest terrorist activity in Pakistan. It’s very annoying that shia’s, that are in minority and are only 6% in Pakistan, according to Amnesty International survey 2008, wanted to hold on 94% Sunni Muslims Pakistan, as shia’s terrorist group’s name shows….. Tehrik-e-Nifaz-e-Fiqqah-Jafaria.

whether 6% or 20%, the shia population of pakistan are nevertheless citizens of pakistan in case you terrorism loving idiots have not noticed. the government has a duty to protect and serve each and every soul in the country. i pray that the govt lives up to this responsibility and you haters rot in your beds when you sleep at night. islam has no place for violence and hatred so just read you salahs, pay your zakat and observe your duty to Allah swt. i suggest you get busy making pakistan a nation you can be proud of if you are so misguided enough to spread hatred.