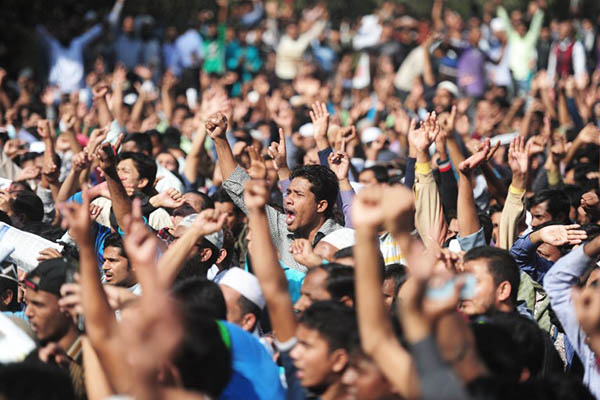 Analysts say the Islamist party must acknowledge its role in 1971 war to survive as a viable political entity.

Bangladesh’s largest Islamist party faces an existential crisis after a series of body blows, including the sentencing to death of its leaders and abandonment by its main secular ally, say analysts.

While support for radical Islamists has surged in many Muslim majority countries recently, Jamaat-e-Islami has bucked the trend after failing to banish the taint of siding with Pakistan in Bangladesh’s 1971 independence war. And with its spiritual leader having recently died in prison, top officials languishing on death row and a muted response to protest calls, observers say the party itself could be on its last legs.

“Jamaat has no future unless it transforms itself into a new party and finds a new leadership that can effectively mobilize people and shake off its war-time legacy,” said Dhaka-based analyst Ataur Rahman. “The sooner it comes to realize this, the better for the party,” added Rahman, a former professor at the State University of New York.

Although Prime Minister Sheikh Hasina’s Awami League and the main opposition Bangladesh Nationalist Party (BNP) have dominated politics since independence, Jamaat has been a kingmaker and served as a junior coalition partner as recently as 2006. But its growing marginalization was sealed last year when it was banned from a general election after judges ruled its charter conflicted with the country’s secular constitution.

That ruling further inflamed supporters already fuming over the trials of around a dozen leaders accused of war crimes in the 1971 conflict. Around 500 people were killed in political violence last year, both in the aftermath of war crimes verdicts and the build-up to January’s election, which the BNP boycotted.

But while Jamaat’s mobilizations last year were a show of strength, the subsequent violence alienated the public.

The first verdicts last year saw hundreds of thousands take to the streets. But there was a tepid response to calls for protests and a strike last week after Jamaat assistant secretary general Mohammad Kamaruzzaman’s appeal against his death sentence was rejected. The International Crimes Tribunal, a domestic court, also sentenced Jamaat’s supreme leader Motiur Rahman Nizami and a key financier to death in October.

While the verdicts triggered sporadic violence, it was nothing on the scale of last year.

To compound Jamaat’s woes, there are now signs the BNP—led by Hasina’s arch rival and former premier Khaleda Zia—is turning its back on its one-time partner in government. The BNP refrained from condemning the recent verdicts, even though one of its own leading lights has been sentenced to hang.

Its failure to offer condolences after the death of Ghulam Azam, Jamaat’s 92-year-old spiritual leader who died last month after being convicted of war crimes, underlined the cooling in relations.

The BNP has “realized that it will alienate a big part of the electorate if it continues to support tainted Jamaat leaders,” Rahman said.

Headed by Azam during the war, Jamaat opposed the secession of the then East Pakistan from Islamabad and branded the struggle for independence as a conspiracy by Hindu majority India. During the nine-month war, Jamaat provided the foot soldiers of the pro-Pakistani militias behind the mass killing of intellectuals.

Hasina’s government claims three million people died in the war although independent estimates vary, and has defended the trials as the only way to come to terms with the past. After the war Azam fled to Pakistan and faith-based parties were banned.

But despite Jamaat’s refusal to apologize, Azam was allowed to return in 1978 and revive the party. Its moderate electoral successes allowed it to become a kingmaker throughout the 1990s.

Jamaat’s hierarchy has been in disarray since the election ban, with much of it in hiding to escape prosecutions over the violence. The new leader Shafiqur Rahman has not been seen in public for months.

“Jamaat is paying the price for its total failure since 1971 to have acknowledged its role in the war and specifically to have allowed its 1971 student leadership to become the party’s contemporary leaders,” said British journalist David Bergman who has written extensively on the trials.

Imtiaz Ahmed, a professor at Dhaka University, said Jamaat’s new leadership must address the party’s role in the war if it is to stand any chance of “reviving its fortunes.”

“These latest verdicts have shown once again that it is extremely difficult to do politics in Bangladesh without coming to terms with the war,” he said.

Speaking from a hideout in Dhaka, spokesman Syed Abdullah Taher said it was too early to write Jamaat’s obituary although he acknowledged the death sentences and electoral ban had hit the party hard. “These trials are a sham but we can’t stage protests because police are given orders to shoot on sight the moment we try to march,” he said. Taher however was confident Jamaat would “bounce back,” saying many followers had performed well in recent municipal polls as independents.