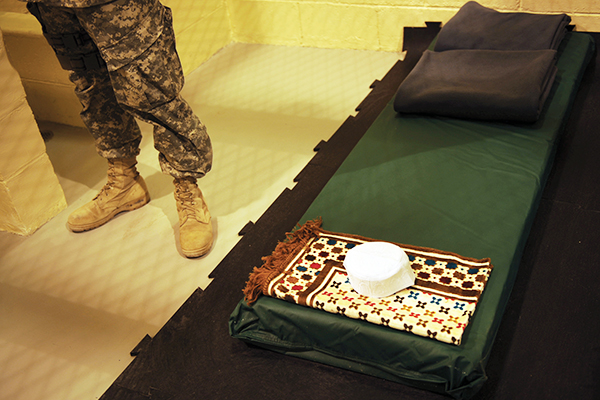 Even though the United States handed over control of Bagram prison, Afghanistan’s Guantánamo Bay, to local authorities last year, their grip on the fate of non-Afghans jailed there remains firm. This won’t change until Dec. 31, when the NATO mission winds down. With this deadline in view and the headache of engaging with Afghans in mind, Islamabad is continuing negotiations with Washington for the repatriation of at least 24 Pakistanis still imprisoned at Bagram. But rights activists say it is neither doing enough nor doing right what little it is.

According to an estimate from 2012, some 40 of the then 60 non-Afghan prisoners languishing at Bagram were from Pakistan. Since then, 16 of them have been quietly repatriated to Pakistan: 10 on May 15 and six last November.

“We have the names of the 24 Pakistanis remaining in Bagram,” says Sarah Belal of the Justice Project Pakistan, a nongovernmental organization providing legal services to the families of the Pakistani inmates. “But this doesn’t account for others who may have been picked up since 2012. They’re ghost prisoners as far as we’re concerned.”

JPP filed a petition at the Lahore High Court four years ago seeking do-more action from the Pakistani government. The court ruled that Pakistani diplomats must exercise their right to visit the inmates to record their version of events and to file regular updates in court on the status of the prisoners for the benefit and knowledge of the families and the public.

The diplomats did visit, but some former Bagram detainees say their attitude was adversarial. They were skeptical of the inmates’ versions and even challenged their avowals of Pakistani nationality. In some cases, Islamabad filed papers in court sanctifying the U.S. version—even though records obtained by organizations like JPP proved these accounts false. The updates the court requires have also been slow in coming. The government has also yet to provide the court with a list of Pakistanis who may have been taken to Bagram prison after 2012.

“In one case, the government said a particular detainee was picked up in 2010, but we had letters from him to his family from Bagram dating back to 2008,” says Belal, adding that some of the Pakistani inmates have been at Bagram since the prison opened in 2002, that many have no evidence against them, and that most have long been denied access to legal counsel and due process. “We have very little confidence that all the detainees will come out,” says Belal. “Nobody seems to have a clear plan as to what will happen.”

Islamabad denies the charge it isn’t doing enough. “They are our nationals, we are engaged in negotiations with the Americans to have them [repatriated],” Tasnim Aslam, spokesperson for the Ministry of Foreign Affairs, told Newsweek. She said there are “around 20” Pakistanis still left at Bagram of which 10 were expected to be repatriated “soon.”

The U.S. Department of Defense says the relevant countries know the exact number, and names, of their citizens imprisoned at Bagram as well as the challenges involved in specific cases. “We continue to work toward our goal of repatriating or transferring all of the detainees we hold,” Lt. Col. Todd Breasseale, a Defense spokesman, told Newsweek. “We will continue to do so in a manner that is both humane and mindful of the security concerns of our allies, our partners, and our own nation.” He declined to comment on the exact number of Pakistanis still at Bagram. “The United States remains at war,” he added, referring to U.S. President Barack Obama’s recent decision to remain engaged in operations in Afghanistan through 2015. “I’m unaware of any requirement to forfeit what armies have done for time immemorial, to detain enemy combatants, while still engaged in direct actions against violent extremists.”

The negotiations process is multilayered and complicated, a fact all sides concede. But JPP maintains Islamabad is not doing all it can to protect its own. It took six years for the Pakistani government to even confirm the nationality of some of those imprisoned at Bagram, it says, delaying the first step in the repatriation process: to know whose release is to be negotiated. The rights organization also says Islamabad has made scant efforts to keep the inmates’ families updated or explain to them how the repatriation process works.

JPP says Pakistani authorities treated the six men repatriated last November, after almost a year’s delay, inhumanely: they were hooded, cuffed, violently searched, made to put their thumbprints on blank papers, and were confined in underground dungeons. After JPP tracked them down and made noise, the men were relocated to Peshawar’s central jail. Within two months of their being moved to Pakistan, all six men were finally released.

“[The former detainees] told us even the Americans didn’t treat them the way the Pakistanis did,” says Belal. Under international law, the U.S. cannot repatriate prisoners to countries where they may face risk of torture, she says. “Being held incommunicado in Pakistan, the risk of torture increases exponentially. We took this up with the Americans, too, since even a single allegation by a detainee of torture can hold up the other transfers.”

Like with the six repatriated in November, the transfer of the 10 Pakistanis from Bagram on May 15 was not notified to the inmates’ families by Islamabad; word of their repatriation came through the International Committee of the Red Cross. JPP won the right from court to visit the 10 men and discovered that three of them were being kept in jails in Sahiwal and Quetta and have been granted access to their families and lawyers. This, says Belal, marks a modest improvement in Pakistan’s treatment of the repatriated. However, she adds, the other seven are being held by the FATA Secretariat, which has denied them their rights. On June 6, the Lahore High Court directed the Ministry of Interior to work with the FATA Secretariat and ensure that the seven men are treated lawfully. The next hearing is scheduled for June 19.

JPP, like Islamabad, wants all Pakistani inmates at Bagram repatriated ahead of the Dec. 31 deadline. If this doesn’t happen, negotiations may have to start afresh, between Islamabad and Kabul. In case Washington decides to transfer the non-Afghan prisoners to the U.S., their repatriation or release could get delayed indefinitely. Belal is aware of the complications, and hopes Islamabad is too. “We just want to push the government to make sure they do the most that they can,” she says.

The Roots of Baloch Nationalism