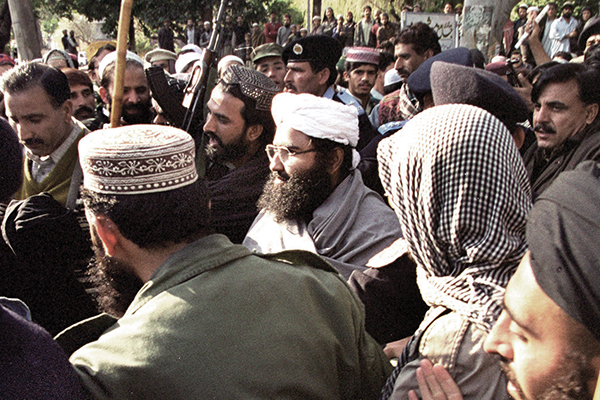 Maulana Masood Azhar, chief of the Jaish-e-Mohammed militant outfit, went underground following the Mumbai attacks of 2008. For the last six years, he has kept his head down and stayed out of the headlines. That is until now.

On Jan. 26, an anti-India rally in Muzaffarabad, capital of Pakistan-administered Kashmir, aired a specially-prerecorded and characteristically fiery speech from Azhar. Thousands attending the rally were roused by the 45-year-old’s words calling for jihad to extricate India-administered Kashmir from New Delhi’s talons.

Closer to home, Azhar was also scheduled to appear, in person, to judge a declamation contest on Feb. 16 at Lahore’s University of the Punjab, where jihadists coerce and bully other students into at least outwardly embracing their toxic worldview. But the event—organized by a student union shepherded by one of Azhar’s most trusted lieutenants, Mufti Muhammad Asghar Khan Kashmiri—was cancelled without cause. “We were forced to call if off,” one of the student organizers told Newsweek on condition of anonymity. “The management said we were violating campus rules. They even threatened us with violence.”

Jaish denies Azhar was ever to appear on campus.

The probable reason for the cancellation is the flush it would have caused the Punjab government, which runs the university and is often accused by political opponents of being “soft” on militants. Prime Minister Nawaz Sharif and his chief-minister brother, Shahbaz, are both committed to mending fences with India. Allowing Azhar free rein would kibosh this agenda. Pakistan banned Jaish-e-Mohammed in 2002 and the Punjab government has offered Rs. 5 million for information leading to the arrest of anyone linked to Jaish. So what does Azhar’s sort-of return to public life signal?

“Until India leaves Kashmir, it will remain our enemy,” a Jaish spokesman told Newsweek asking that his name not be published. “We have been fighting this battle since the last 15 years and will continue to do so.”

As Afghanistan heads toward civil war this year following the impending withdrawal of virtually all international troops, Pakistan may be playing self-preservation by dividing the militants it can’t contain or execute, offering them the Kashmir front as a channel for their spleen.

Azhar’s is a textbook case of Pakistan’s inability to manage or come clean about its allies past. Officially, he was house-arrested only once, in 2001, and was released by a supine court. But his case is enrobed in purposeful confusion. A former defense minister says Azhar was also detained, unofficially, in 2008. The Jaish spokesman also confirms this and says Azhar was released from house arrest in Bahawalpur in 2010.

The Jaish spokesman claims Azhar is currently in Srinagar, capital of India-administered Kashmir. More likely, he is somewhere in his hometown of Bahawalpur. Usman-o-Ali, the five-acre madrassah Azhar founded in Bahawalpur, has visibly beefed-up security. It doesn’t allow in cameras and fiercely frisks visitors, including those coming to merely pray in the compound. “They have their own security and rules,” says a reporter who has recently visited the site. “Once inside, men are not even allowed to walk together.”

A 2011 Pakistani intelligence report had flagged this seminary for “actively fanning radicalism” for good reason. Maulana Umar Qasmi, leader of Ahrar-ul-Hind, the breakaway Taliban faction that has owned recent attacks including the Islamabad district court raid-and-bombing, matriculated from Usman-o-Ali. The newly-revealed Ahrar-ul-Hind is opposed to “peace” talks between Islamabad and the Pakistani Taliban.

For India, Azhar is a source of deep concern. The day before his pre-taped speech in Muzaffarabad, airports were put on high alert as Indian authorities feared a plane hijacking by Jaish. India had arrested Azhar in February 1994 and was forced into releasing him in December 1999 following the hijacking of Indian Airlines Flight 814 that was made to land in Kandahar. One of Azhar’s brothers reportedly led that hijacking.

Azhar—a former teacher and son of a school headmaster, Afghan jihad vet, and author of several treaties on jihad who had traveled to Kenya and Somalia in the early 1990s to shore up his jihadist credentials—founded Jaish in 2000 as a splinter of the Harkat-ul-Mujahideen. India blames Azhar and his Jaish for the suicide attack on Parliament in New Delhi in December 2001—an act that brought India and Pakistan to a weeks-long confrontation at the border and to the brink of war.

Jaish is also suspected of involvement in the kidnapping and beheading of Wall Street Journal reporter Daniel Pearl in 2002, and a 2003 assassination attempt, through a former Pakistan Air Force officer, Adnan Rasheed, on then-president Pervez Musharraf. Rasheed, who the Taliban sprang from Bannu Jail in 2012, had claimed to having been trained at a Jaish camp in Khyber-Pakhtunkhwa province’s town of Mansehra. He told a jihadist publication that disillusionment with Jaish led him to join the Taliban.

The Jaish spokesman was pleased about the high alert at Indian airports in January. “India should remain on high alert,” he said. “They are committing atrocities against Muslims. Look at what they did a few days ago with students at a Kashmiri university. Every action has a reaction.”

It is likely the fear of reaction that has led Pakistan to downplay the Azhar news. “This is probably a onetime event,” Tasnim Aslam, spokesperson of the Foreign Office told Newsweek. “He escaped scrutiny, but his organization is banned in Pakistan and its activities are regularly monitored.” If only that were enough to stop any militant group.

He had never disappeared., don’t believer everything someone tells you! he was always in bhawalpur, at his home, comfortable.

Uh. Sure he is in India. That is what this group wants India to think, to panic them.

Serial killer Charles Sobhraj has claimed that he worked as an arms dealer for Taliban after befriending Jaish-e-Mohammed chief Masood Azhar in Tihar prison and was even associated with American spy agency CIA.

Most ill informed article! The man used to write for a weekly magazine not write jihadi books. His madrassa does not spew venom.

This Guy Benazir Shah only wants to drive attention, Masood can never be in India & especially in Kashmir, It is highly dangerous area, with full packed spy agencies ready to hund down any kind of leadership of Militants. Agencies doesn’t know about Azhar but this guy know, go & commit suicide. Azhar is with Afghan Taliban, He even abandoned his group a long before. He is not hiding but working under leadership of Taliban. you should follow news from last six years.