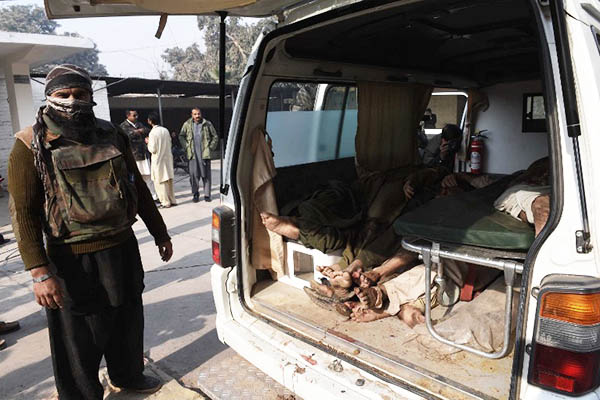 A security official stands next to bodies of suspected Taliban militants. A. Majeed—AFP

An argument against military courts.

There’s no gainsaying that Pakistan faces a terrible problem of terrorism. Without doubt we need to tackle it. But that requires formulating coordinated strategies under a comprehensive umbrella policy, not going piecemeal. The current debate in Pakistan on the establishment of special military courts to try cases of terrorism is at best emotional and uninformed and at worst, self-serving.

Consider the arguments in favor of these courts:

Even if we accept that the criminal justice system as it stands cannot deal with the problem, it should be obvious that these arguments are neither cogent nor backed by any evidence that military courts will be more effective than the existing system. In fact, when we posit it this way, we need to parse the entire proposition more carefully, the first issue being the definition of what we mean by “effective.” Does effective mean the ability to determine conclusively that someone is a terrorist so the military courts can sift the grain from the chaff better than the existing courts can, or does effective mean it is easier to conduct summary trials and award summary executions through the military courts with scant regard for established legal procedures?

The answer is not too difficult to determine. If the criminal justice system is indeed defective, then one is hard pressed to accept that military courts will be more effective. The reason is simple: unless the military can produce from within its ranks, overnight, thousands of investigators and prosecutors to perform functions that its [military’s] personnel are never trained for, it will, of necessity, rely on the same bunch of people who are part of the system that is widely being declared as broken.

Since miracles don’t happen in the banal world, how will the quality of prosecution improve simply because the case is being presented before a military officer sitting as judge, when it could not before a ‘civilian’ judge?

Therefore, unless one is blind, plain stupid, or deliberately perverse, the only way for the military courts to be “effective” would be through suspension of normal legal procedures. Since prosecution cannot build a tenable case, the very reason for creating these courts, and since the military courts will have to rely on the very prosecutorial system that’s dysfunctional, the focus will be on the form of due process, shorn of substance. That, which could otherwise get an accused acquitted in a normal court of law, will still get him sentenced, even to death, in these courts.

Now, if this is an outcome that we, or a majority of us, want then we should be upfront about it. There’s no point in trying to dress this up in the faux garbs of legalities. As the proponents of military courts continue to argue, there are other countries in the world, including “advanced” ones that have resorted to establishing special courts and military tribunals. Of course, it does not matter in the least, logic being the first casualty in such non-sequiturs, that we have, for long, criticized these “advanced” countries for creating exceptions. Even so, perish the thought that beyond a cursory wiki-knowledge of some cases, the proponents have any hard facts on the performance or the deterrent effect of such arrangements.

In the U.S. for instance, the Supreme Court in Ex Parte Milligan ruled that military tribunals were unconstitutional when civilian courts were still operational. This was in the wake of the U.S. Civil War. In Ireland, Great Britain introduced Diplock Courts, a slight deviation from the norm, but they weren’t military courts. They continue to be criticized, nonetheless. In WWII, creating an exception, the U.S. government interned citizens of Japanese descent. To wit, like the Rosenbergs’ execution, that episode is accepted by the U.S. as a blot on its norms.

One can go on. But the point is simple: the proponents, apart from the desire to avenge the bestiality displayed by the terrorists—which, given the havoc these groups have wreaked, is understandable—do not have much hard data to present. For instance, it is moot whether the summary functions of any special courts have managed to put an end to terrorism or even contributed to lessening it. Going by the statistics regularly put out by the Directorate of Inter-Services Public Relations, we have killed more terrorists in combat and/or aerial/artillery strikes than we are likely to through summary executions. But these combat killings have not really degraded the groups’ capacity to mount reprisal attacks through acts of urban terrorism.

What evidence do we have that the formation and functioning of special military courts will manage to do what direct combat has not achieved, or only limitedly achieved?

So, at best, even if we grant that this emergency measure will be ‘effective’, a dubious proposition, its effectiveness will be at best very limited, unless it is backed by strategies that address the myriad factors that have created this menace. I can hear someone saying that we shall do that, of course. To which, I say: good luck with that because if we cannot, presumably, streamline the criminal justice system, for which reason we are creating special military courts and which in some ways is relatively easier to do, I am hard pressed to assume that we can, or shall, do the rest—i.e., tackle the factors that have caused this problem in the first place and where the degree of difficulty is much greater and requires a comprehensive and coordinated response.

Conversely, the case against military courts—given the long-simmering problem of civil-military relations in Pakistan which makes limiting the role of the military an imperative—is much stronger and backed by hard data.

The Supreme Court of Pakistan, in an earlier instance, has already dealt with the validity of military courts and found them unconstitutional. In a seminal 1999 judgment, the SC declared unconstitutional military courts that had been formed to combat terrorism in Karachi. According to the SC, it is legally untenable to establish military courts given Article 10-A of the Constitution, which ensures fair trial as a fundamental right. In the judgment in the Liaquat Hussain case, which annulled the formation of military courts, the SC also prescribed certain guidelines to expedite the disposal of terrorism-related matters. To date, say jurists, those guidelines remain unimplemented.

This is not to argue that, given the problem, we need to act as if it is business as usual. Quite the contrary. In fact, we need to tackle the issue at war footing. But doing that does not mean putting all the eggs in a single basket, in this case easily procured, because people want revenge and the government must be seen as responding to the public outcry.

The reasons mentioned by the author in ‘favor’ of military courts are not the complete story. But before i give my own reasons, i would first like to clarify that by convening military courts it is NOT the military or Pak Army that is exerting itself, but the fact of the matter is, like in any other emergency situation it is the CIVILIAN govt that is requisitioning the military to assist it.

So, the prejudice against the military here is ill-founded.

Now coming towards the piece. First, military courts are not something alien to this world and the assumption that the officers delivering justice through these courts have no education in law is again wrong. Just to educate the writer, the militaries all over the world have its legal branches, rather they have a dedicated department to deal with discipline and legal cases occurring within the forces, primarily because all militaries have its own law book which is normally stricter then that of the civilians. In our case it is the MPML (Manual of Pakistan Military Law).

Thus, the Pak Army too has its JAG (Judge Adjutant General) Branch just as the US military has the MCMJ (Military Code of Uniform Justice). So, the military judges in these (military) courts are supposed to be from the JAG Branch which are infact students of Law and have been trained as judges.

This was infact not expected from a writer like Ejaz to miss this point. How can a guy who haven’t read law be given the responsibility of a Judge? This is irrespective of the fact that EVERY military officer has to pass his promotion exam TWICE where MPML/Law is a mandatory subject.

This is because the military is supposed to dispose off its offence case itself. So, even though a military officers (the world over) are trained to convene courts but still these military courts being made to deal with terrorists aka ‘civilians,’ the judges here would be the one who are properly and adequately qualified.

Second, these courts will assist in fast tracking the delivery of justice. We all know how hundreds of thousands of case are lying pending in civilians courts and thus important cases get delayed in their disposal. Having a parallel system to dispose off such cases will ensure delivery of speedy justice.

Lastly, politicians and few other are ‘afraid’ of military courts not because they will impinge upon civil liberties but because they cant be bought, twisted or pressurized as can the civilian courts.