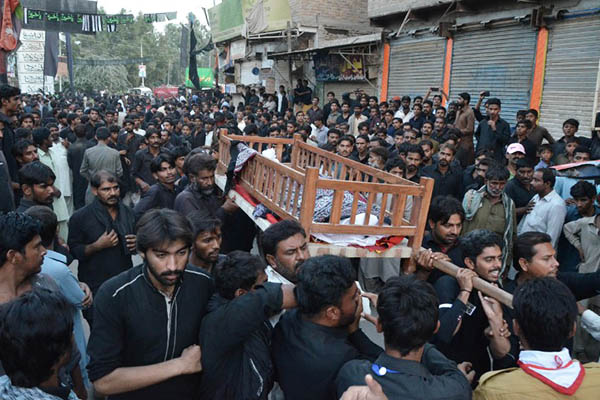 At least 24 people killed in suicide bombing outside residence of local Shia leader ahead of Muharram procession.

The Sunni extremist group Lashkar-e-Jhangvi (LeJ) claimed responsibility on Saturday for a suspected suicide bombing that left 24 dead in Sindh province, according to a minister from the region.

Suhail Anwer Siyal, home minister for Sindh, said the banned group had admitted being behind the attack in Jacobabad, which took place on Friday outside the residence of a local Shia leader ahead of a religious procession. “According to initial information I have got, Lashkar-e-Jhangvi has claimed the responsibility of the blast,” Siyal told local media in Karachi. He added that the fingerprints of the suspected suicide bombers were now being analyzed as police and counter-terrorism teams begin work.

LeJ are known to have been behind numerous bloody attacks on minority Shia Muslims, who make up around 20 percent of Pakistan’s 200 million population.

In July, LeJ’s leader Malik Ishaq was shot dead along with 13 other militants, including senior commanders, in Punjab, but the group remains active, according to experts.

Sindh’s minister for health Jam Mehtab Dahar told AFP the death toll from the Jacobabad blast had risen to 24 from 16 on Saturday, as more wounded people succumbed to their injuries. Regional police chief Sain Rakhio Mirani said that at least six of the victims were children.

“Many injured and bodies were brought to the Civil Hospital,” senior police officer Zafar Iqbal told AFP immediately after the attack, initially describing the blast as a suicide bombing but later saying authorities were still investigating.

Civil Hospital chief Dr Altaf Wagan said at least 15 bodies and dozens more injured had been brought in, and said that more wounded had been shifted to two other hospitals nearby.

Witnesses described the wounded being rushed to hospital by ambulance and auto-rickshaw, and said there were children among the dead and injured. “We were some three kilometers from the spot and heard the blast,” said Jan Odhano, a rights activist in Jacobabad. “We rushed toward the spot. We saw people running here and there, some were crying and wailing, we could see blood on the clothes of some people.”

Most of the bodies he saw were children who appeared to be between eight and 15 years of age, he said, describing torn clothing and blackened flesh.

Provincial transport minister Mumtaz Jakharani, who was at the hospital, said protesters had gathered there with some damaging medical equipment. “The doctors are scared of the agitating people,” provincial health minister Jam Mehtab Dahar told AFP. Witnesses said protesters also blocked roads at many spots in the city, the capital of Jacobabad district, while Khoro, the district officer, said he had been trapped in his office by “charged” demonstrators who had set the entrance to it alight.

Some witnesses reported clashes between demonstrators and police.

Dahar confirmed that the injured were also sent to the hospital at the Shahbaz Airbase and the Jacobabad Institute of Medical Sciences, with some airlifted to nearby Larkana.

Pakistan is on high alert and has deployed some 10,000 troops and 6,000 paramilitary members to prevent sectarian violence during the mourning days of Ashura in the holy month of Muharram, a tense period in previous years.

Muharram, which began last week, sees Shia Muslims hold processions and gatherings to mourn the martyrdom of Imam Hussain at the Battle of Karbala in Iraq in 680 A.D. Hussain is equally revered by Sunnis, but hardliners oppose the public mourning of his martyrdom.