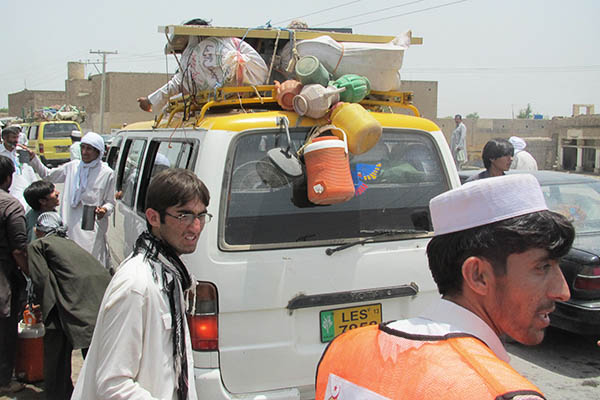 Over 80,000 people have fled North Waziristan in the past two days alone, as the military prepares for a sustained operation to drive militants out of the war-torn tribal area.

The Pakistan Army has mobilized tanks and troops, in addition to fighter jets, and is expected to begin a new, more intense phase of Operation Zarb-e-Azb after a three-day window to allow civilians to leave the area ends on Friday. Tribesmen from North Waziristan have been fleeing the area since May when the military started staging airstrikes, and officials say over 150,000 have fled the region already, with the bulk reaching Bannu, along the border with Khyber-Pakhtunkhwa province, in the past two days. Many tribesmen are also traveling with their livestock, with officials stating over 50,000 animals have been transported to Bannu in the past two days.

Bannu, whose average population is around 700,000, has seen the total jump to almost 900,000 since the operation started and lack of residential spaces has led to spiking house rents and resentment for the government.

This is not enough, according to doctors working to help the IDPs. Al-Khidmat Foundation, which has set up a free medical camp at Bannu and is providing medicines to the tribesmen, says the situation could become untenable. “A lot of people, mostly women and children, have diarrhea, low blood pressure and nausea,” said Dr. Khalid. “These people came out of their homes with barely any necessities and are in trouble,” he warned.

Arshad Khan, the director general of the Federally Administered Tribal Areas Disaster Management Authority (FDMA) told Newsweek that registration points and a camp had been set up for IDPs in Baka Khel, but most people were preferring to stay with relatives or in rented houses. The camp, which reportedly lacks basic facilities including electricity and running water, only has eight families thus far. Another official of the FDMA confirmed the figures and said: “The exodus might touch 300,000, as people are continuing to rush out in long queues.”

A statement issued by the Inter-Services Public Relations (ISPR) Directorate claimed the military had increased the number of registration points at Saidgai checkpost—on the border between Bannu and North Waziristan—to 20. “We have 10 registration points each for men and women to ensure a speedy and organized evacuation,” it said.

However, despite such efforts, the government and military have been unable to properly deal with the huge numbers that are attempting to leave the tribal area.

On Thursday morning, over 10,000 vehicles were ready to leave North Waziristan with a queue stretching several miles beyond the Saidgai security checkpost. Travelers said transporters had raised their fares and were profiting off the situation.

Darat Ullah, from the Adik area of North Waziristan, reached Bannu after traveling for almost 12 hours with his cow. “I left my home because I was terrified we would be killed by airstrikes,” he said.

Several fleeing tribesmen have echoed the fear, claiming the military airstrikes have resulted in dozens of civilian casualties. Falak Naz, another IDP, said the airstrikes had killed two of his children. “We were sleeping when the missiles struck our home. Within a fraction of second, I had lost two of my sons,” he told Newsweek with tears pouring down his face. “It was such a tragic moment that I didn’t have the courage to offer their funeral prayers and left the area,” he said, adding that one of his brothers had ensured they got proper burials.

“I had to hire a truck for Rs. 15,000, which would normally have cost Rs. 3,000,” said Ashraf Ullah, another traveler, adding that Saidgai was the worst checkpost for IDPs. “Three people died due to the heat,” he said.

Ashraf said he started his journey on foot and complained that authorities were insulting their women by making them travel with strange men. “Our women rarely step out of their homes but are now stranded with strange men,” he said, referring to the security forces at the checkpost. “It is humiliating for our mothers and sisters,” he added.

Ashraf, who works in the U.A.E. and returned to North Waziristan to help his family, said the government had not prepared for the military operation. “The government could catch every single terrorist through the imposition of the Frontier Crimes Regulations,” he said, referring to the controversial laws applicable to the tribal areas.

“We are not responsible for the terrorists living in our area. Why has the government not taken the political administration to task for failing to rid our region of foreigners,” he said. “Is the military operation the only solution to save North Waziristan from militancy?”