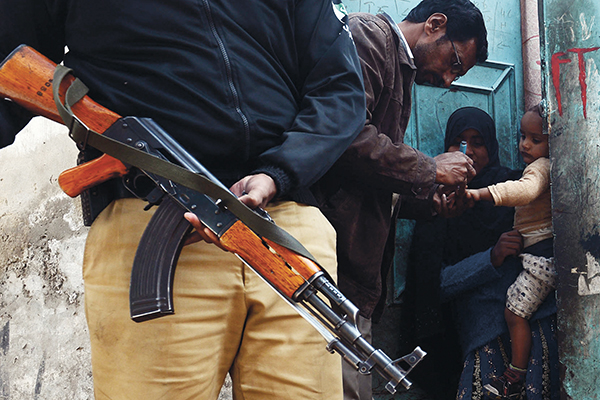 Taliban gunmen wounded a polio health worker in northwest Pakistan on Monday, at the start of a fresh campaign to vaccinate children against the crippling disease, officials said.

Two attackers fired bullets at the vaccinator as he came out of a health center in Shabqadar district in Khyber-Pakhtunkhwa province.

Pakistan is one of only three countries where polio remains endemic as attempts to stamp it out have been badly hit by opposition from militants and attacks on immunization teams that have claimed around 62 lives since December 2012.

Shafiullah Khan, district police chief in Charsadda, said the two gunmen were on a motorbike and had sprayed the vaccinator with bullets, hitting him in the head. He was shifted to a hospital in Peshawar.

The health worker was part of a three-day campaign that began Monday aiming to vaccinate around 2.7 million children in 21 districts against polio.

A hardline breakaway faction of the Tehreek-e-Taliban Pakistan (TTP), Jamaat ul Ahrar, claimed responsibility for the attack. The militants have in the past claimed that the polio vaccination is a cover for espionage or a Western conspiracy to sterilize Muslims.

Officials say the number of polio cases recorded in Pakistan has reached 246 for the year—a 14-year high and more than double the total for the whole of 2013. Among the new cases detected, 136 are in the tribal areas that border Afghanistan and are the stronghold of Taliban and Al Qaeda militants.