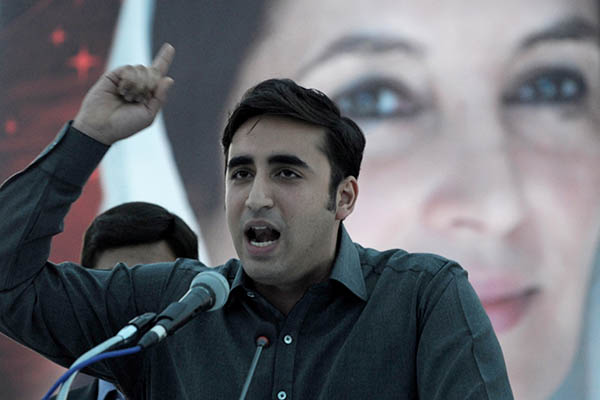 A second major political party on Saturday warned of pre-poll rigging ahead of general elections on July 25, a day after tensions were ratcheted higher by the dramatic arrest of former premier Nawaz Sharif.

Bilawal Bhutto-Zardari, chairman of the Pakistan Peoples Party (PPP), said the caretaker government installed ahead of the vote was not giving his party a “level playing field” in the campaign.

“The press is facing censorship, political activists are being detained, and this is not only a violation of human rights but also pre-poll rigging,” he told a press conference in Peshawar.

PPP politicians have said they have been prevented several times from holding campaign rallies, including one in Punjab province last week. Media, politicians, and analysts have widely accused the military of meddling in the polls, which would be only the second democratic transition of power in the country. The military denies taking any “direct role” in politics.

Bhutto’s statement aligned his party against the military establishment and brought him closer to the Pakistan Muslim League (Nawaz) party of Nawaz Sharif, who has claimed for months that he is the victim of a military conspiracy.

The election will pit the PMLN against its main rival, the Pakistan Tehreek-e-Insaf, a party led by cricket star-turned-politician Imran Khan.

On Friday the political temperature rose as Sharif, who was banned from politics for life last year, returned to Pakistan from London and was arrested. He was sentenced in absentia to 10 years in prison for corruption earlier this month.

The party’s current head, Sharif’s younger brother Shahbaz, told a press conference in Lahore on Sunday that his party members would wear black armbands to express their support.