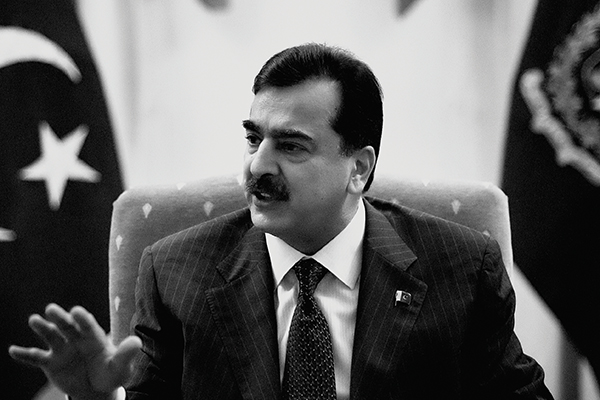 Sacked by the Supreme Court in June last year for refusing to act against his party chief, Yousaf Raza Gilani still has the distinction of being Pakistan’s longest serving prime minister. We spoke with him recently in Lahore. Excerpts:

Your Pakistan Peoples Party didn’t do as well as you had expected in the elections in May. How do you intend to keep the party relevant nationally?

The Peoples Party is a party of the poor, the downtrodden, and the deprived. It is a party for women and minorities. In 1997, the party was completely wiped out from the national landscape. Not a single PPP minister was reelected from the Punjab and we could not even form the government in Sindh. In 2008, not only did we bounce back, we made history. Our party became relevant again; it completed its full, five-year term. The world is excited about that, about Pakistan achieving a seamless transition from one democratically-elected government to another. As an old parliamentarian, this is what I feel the party should do for now: Let’s not be in a hurry, let’s just sit and wait. Let the newly-elected government go for issues which are outstanding, such as electricity shortages, terrorism, and inflation. They won on the slogan of change, so let them do that. In the meantime, Peoples Party should act as responsible opposition and stick to issue-oriented politics.

What do you attribute the PPP’s defeat to?

Our party was leaderless after Benazir Bhutto’s assassination. Of course, through her will and through the decision of the party’s Central Executive Committee, [Asif Ali] Zardari became the co-chairman and Bilawal Bhutto Zardari was appointed chairperson. But let’s take my case for example. My political career has included the office of [National Assembly] Speaker and federal minister. Yet, I was never groomed to be the prime minister of Pakistan. It was an enormous responsibility, to fulfill the vision of [party founder Zulfikar Ali] Bhutto and Benazir. I was now in their chair. I had to take decisions which were dignified and in keeping with the manifesto of the party—and in the last five years we have managed to achieve a lot of what was in the manifesto. It was Benazir’s dream to restore the original 1973 Constitution. We did that. Pakistan inherited the Westminster form of government, but after successive dictatorial rulings our system of governance was neither presidential nor parliamentary. We rectified that. I think that alone is our single greatest achievement. As prime minister I visited Azad Kashmir eight times. And there were no political prisoners during my term. Not even one.

Who will lead the party’s 2018 election campaign?

That is for the party to decide, I am no one to answer that. Whatever Bilawal Zardari feels, he should do. In my country it is not safe or conducive for moderate forces to do politics. In the buildup to the last elections, we were not allowed to hold rallies. The day I proposed to hold a public meeting in Multan my son was kidnapped.

Did President Zardari’s lack of popularity cost the party much ground?

The Peoples Party was elected [to federal office] in 1988 under the leadership of Benazir Bhutto. It lost in 1990. Who was responsible? We won again in 1993 and were removed in 1996. Who was responsible then? This is a grave misconception to say that we have not performed well. The leader of the opposition is from our party. We are the second largest party in Parliament, have a government in Sindh, a clear majority in the Senate, and governments in Kashmir and Gilgit-Baltistan. Listen, the people of Pakistan have a very small appetite. They can only bear one person for so long. I am thankful they tolerated us for five years.

How do you rate the first 100 days of the new government led by Prime Minister Nawaz Sharif?

When I was prime minister, my strength was Parliament. The number of sessions that I attended and the number of policy statements that I made on the floor of the House will one day make it to the Guinness Book of World Records. But Mr. Nawaz Sharif has not been able to do the same. He should work to take the people along with him.

Sharif presided over an all-parties conference recently which resolved to tackle terrorism through talks. Are these summits useful?

All APCs are a way forward. The problem is with implementation. The APC which I headed included participation from everyone, even those who were not in Parliament then, like Imran Khan. We sent the joint resolution of that APC to the National Security Committee, which gave its recommendations. It was also debated in Parliament and duly endorsed by the Cabinet. The challenge for the new government is to apply the agreed points. Either way, we are ready to extend whatever help we can.

How do you respond to criticism that talking with terrorists is not the way forward?

Wars are just not the solution. This is the 21st century. Terrorism is a socioeconomic problem, it can only be solved politically.

Your son Ali Haider was kidnapped on the campaign trail and is being held by the Al Mansuri Brigade. Have they contacted you?

Yes. In fact, I first heard of the group through Newsweek. One Abu Yazeed claimed his group had abducted Ali Haider Gilani. For a long time after that there was no other news. Then someone from the Al Mansuri Brigade rang up my daughter-in-law and later my wife. He told [my wife] that they did not want any ransom, that they had kidnapped our son because of my government’s policies. He demanded the release of all their imprisoned members from across Pakistan. My wife explained that our party was no longer in government and that our family has no say in the matter. He then demanded that his comrades incarcerated in Sindh—where it is the PPP’s government—be set free. At the end of the conversation, she assured him she will deliver his message to the federal government. In the days since, I have met with the director-general of the ISI, the Army chief, and the prime minister. The group called again, asking if we would like to hear the voice of our son. In the recording, Ali appealed to the people of Pakistan, the government, and the security agencies to consider the demands of his captors. He said his health is deteriorating. Everyone knows he is not well and there is no doctor where he is being held.

You also reached out to Maulana Sami-ul-Haq, who tutored Taliban chief Mullah Omar. Have you lost faith in the ability of the security agencies to recover your son?

No, not at all. My security agencies are extremely efficient. I have the utmost trust in the ISI. I actually met Maulana Sami-ul-Haq during Umrah. He extended an invitation and I met him as promised. When we met the discussion was not exclusive to any one subject. We exchanged views on terrorism and education. Of course, I mentioned my son. I asked him if he had any helpful connections.

The National Accountability Bureau appears to be gunning for you. How do you see this unfolding?

This is not the first time I have faced NAB. I spent five years in jail. But you see there are two laws in this country, one for the Peoples Party and the other for everyone else. Let’s come to [my son] Musa’s ephedrine case. They claim someone called the ministry of health claiming to be my son and applying pressure. But the ministry officials were just that decent that they didn’t even bother to verify whether it really was him. Also ephedrine is not narcotics, it is a medicine.

The Supreme Court convicted you for contempt. Recently, it withdrew its contempt notice on Imran Khan. How do you view the resolution of his case?

It made a mature decision. I appreciate that.

Heartening really. may his son return to him

And he still doesn’t know who took his son?

I pray 4 da return of his son