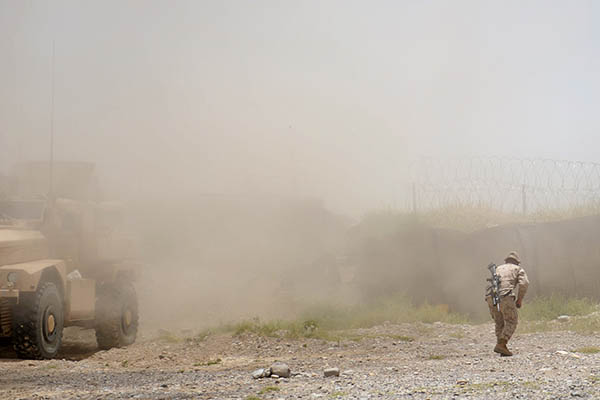 The insurgents’ 10-day offensive continues, with locals saying Kabul has yet to recapture two key areas of Sangin district.

The Taliban have established a foothold in southern Afghanistan in a 10-day battle against Afghan forces, locals said Sunday, as the army and police struggle to prove they can defeat the insurgents without NATO help.

A coordinated assault by 800 Taliban fighters on police checkpoints and military posts began on June 19, with Afghan forces rushing to recapture parts of Sangin district in Helmand province. Despite government claims that the Taliban have been routed in a series of counterattacks, Hashim Alkozai, a local elder, said that the insurgents had successfully defended two key areas of the district.

“The government has sent more reinforcements to Sangin, but the Taliban still have two parts, Barekzai and Bostanzai, under their control,” Alkozai said after fleeing to Lashkar Gah, the provincial capital of Helmand. “President Hamid Karzai has promised to send us some aid, but that is not enough, our people need food and shelter.”

Sangin, a strategically important district at the center of Afghanistan’s lucrative opium trade, has been the scene of fierce fighting for years between the Taliban and U.S.-led NATO forces. With the NATO combat mission winding down this year, the Taliban offensive is seen as a test of the NATO-trained Afghan government forces now responsible for quelling the insurgency.

British troops fought bloody battles in Sangin for four years to little effect, before U.S. marines replaced them in late 2010 and finally pulled out themselves only last month. “The fighting is still ongoing in some parts of Sangin, more reinforcements have been sent in to eliminate the pockets of resistance,” said Omar Zwak, the spokesman for the Helmand governor.

This summer’s “fighting season” will be the last with U.S.-led combat troops deployed in Afghanistan, after a 13-year war that has cost the lives of 3,500 coalition soldiers and failed to crush the Taliban. The fighting in Helmand has come as politicians in Kabul are locked in a stalemate over the presidential election, with one candidate, Abdullah Abdullah, saying he rejects the ongoing vote count due to massive fraud.

On Sunday the government claimed the Taliban had been beaten back in Sangin and 260 insurgents killed, while a Taliban spokesman said that fighting continued. “The Taliban have planted mines in almost every part of Sangin, so no vehicles dare to drive even on the main roads,” said Toor Jan, who escaped the fighting by walking for two days with 10 members of his family to Lashkar Gah. “We are now living with our relatives but this cannot continue for long. We are in severe need of any kind of assistance,” he said.

The Afghan government said it had not requested any NATO help, but the coalition said it had provided limited close air support as well as intelligence, surveillance and reconnaissance help.

The threat of a Taliban revival as foreign combat troops withdraw is a major fear for many Afghans, though government and NATO officials insist that the national army and police are increasingly effective. Concern about Afghanistan’s stability has also been heightened by the deepening crisis over the election to select a successor to President Hamid Karzai, who has ruled since 2001 when the Taliban regime was ousted.

Soon after the poll on June 14, Abdullah accused his rival Ashraf Ghani, Karzai and the election authorities of committing systematic fraud to keep him out of office. With the preliminary result due to be announced on Wednesday, Ghani is reported to be ahead in a surprise comeback after finishing well behind Abdullah in the eight-man first-round election.

The United Nations and Afghan allies have been working hard to try to prevent a contested outcome, but Abdullah’s campaign on Sunday confirmed he was set to reject the result, fueling tension between rival supporters.

The U.N. on Saturday called on candidates to “refrain from any acts that incite imminent violence, civil disorder or lead to instability.” The final election result, after adjudication of complaints, is scheduled for July 22.