Home Culture The Gem of Morocco

The Gem of Morocco 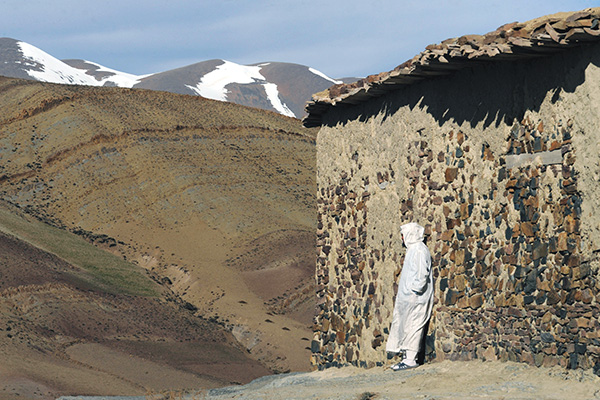 This climber’s paradise can’t be found in any guidebooks.

[dropcap]A[/dropcap]s local American transplant and guide Kristoffer Erickson puts it, Taghia, a remote village in central Morocco’s High Atlas mountains, is like the Yosemite of North Africa. As with many, the analogy works until it doesn’t anymore. Both Taghia and Yosemite are vertically oriented gobsmackers; they will make your neck hurt. Climbing and hiking around these places can make you feel alternately fragile and durable, small and big, utterly dominated and chest-swellingly inspired. They can kill you—and they make you feel more alive than you’ve ever been.

But Yosemite National Park, the Northern California rock-climbing and hiking paradise, receives nearly 4 million visitors a year. Traffic jams the park’s loop road all summer long. To get to the top of Half Dome, arguably the park’s most iconic formation, you have to join the ant line of tourists along cables to its summit.

In the last decade, fewer than two dozen Americans have visited Taghia, and the place sees fewer than 500 visitors annually. In May, when I visited, the village got electricity from the grid for the first time ever. No cars go here; you must hike six miles upstream from the road’s end to arrive. The village, a tight assortment of stone buildings with earthen roofs housing a population of around 250, sits in the heart of a cirque whose limestone walls rear up for thousands of feet, drawing obsessive rock climbers, mostly from France and Spain. In spring, when the snow melts off the High Atlas, water falls over the cliffs in thunderous streams.

This June, two young women, Briton Hazel Findlay and American Emily Harrington, attempted the first all-female ascent of a hard, dangerous route up the central strength of the 2,800-foot formation Tagoujimt nT’souiannt, the tallest wall above Taghia. A documentary filmmaking crew was in tow, myself included. The film, part of the Reel Rock Tour this year, will be featured in more than 400 shows in more than 30 countries. Taghia’s spot is about to get blown up.

Taghia is part of Zawiya-Ahansal, a constellation of Berber villages arranged around the hub village of Aguddim. Ten years ago, on their honeymoon, Kristoffer and his wife, Cloe, following vague directions to the cliffs in Taghia, came through Zawiya-Ahansal. They got worked over by the rock climbing and brutal intestinal distress, and were so broke that when it came time to leave they had to sell their tent to pay for a ride. “It wasn’t the most romantic honeymoon,” Cloe says.

They’ve been back every year since and are the first Westerners to build a house in the region (on land donated to them by the local sheikh). They have become activists here as well. “It just keeps giving,” Cloe said, and so they do, too. She started the Atlas Cultural Foundation, which works on cultural preservation, health, and education issues by organizing in the community and helping to bring outsiders, private and university groups, in for service. Kristoffer helps with the ACF and guides climbing and skiing in what has become his home mountain range (he guides all over the rest of the world, too). They live in Aguddim about half the year with their 4-year-old daughter, Noor. Evenings, sitting on the terrace of their new house that overlooks the village and the mountains, it’s evident they’ve done something right.

Aguddim’s morning light reveals it to be a stunner. Perched below a massive escarpment of limestone and boasting brilliant examples of original, 400-year-old rammed-earth architecture (which Cloe, an architect by training, has helped restore), the village looks like something out of Mediterranean Europe. Zawiya-Ahansal was the last region in Morocco to be brought under French control in 1933, more than 20 years after the incursion began, something locals are still proud of. Residents gather on Sundays and Mondays, souk days, when the men stream in to Aguddim on donkeys and mules or on foot to buy and sell goods and collect their monthly sack of flour, provided by the king (Morocco’s Alaouite Dynasty has ruled for nearly 350 years and is still a de facto absolute monarchy, one of few remaining in the world).

But Taghia is the region’s gem. We stayed at Said Massaoudi’s gite (the other guesthouse in town is run by Yousef Rizki). You find it by walking into the village and asking for Said. A bit of French can get you by if you find the right local. Arabic is better. A Berber dialect is best. No one speaks much English, but locals are eager to help and look out for foreigners as long as they’re polite. A hearty greeting, “Salaam Aleykum!” is a good start. The women ask that you not take their photos, and a good policy is to ask permission any time you want to snap a shot with somebody. There’s no trash disposal in Taghia, so if you pack it in, pack it out.

Accommodations are sparse—a thin mattress on a wooden pallet and a single bare bulb (that can be turned on any time all day now) complete your floor, door, four walls, and a ceiling. It doesn’t seem like any of the climbers (who are not normal civilians) expect, or even want, anything more than this. And it comes cheap: about 120 dirhams a night (roughly $14), including breakfast and dinner. Breakfast is fresh bread with margarine and jelly; dinner is vegetable tagine with chicken, lamb, or goat, and sometimes couscous. The mint tea is bottomless and delicious. The region is famous for its wild thyme and its honey, so get your hands on some if you can. Said’s water is spring-fed and potable from the source, but cisterns that store the water can get contaminated; it’s best to purify water from the tap.

For trekkers, the mountains and canyons are unforgiving and steep. Water is scarce up high. Trails are often exposed to great heights, where a wrong step could mean a big, bouncing, ragdoll fall. This far into the mountains, accidents, even minor ones, can be serious. For climbers there is very little that is easy; you should be experienced leading long routes rated 5.10 and above to enjoy yourself.

If you don’t know what that means, and even if you’re fit and fearless, stick to the trails. They provide plenty of excitement. Summiting and traversing the ridge along Tagoujimt nT’souiannt through the Tire-Bouchon pass is a daylong adventure with ridiculous views. Ask, too, about circumnavigating Oujdad, the iconic formation in the cirque. If you venture into the mountains, you might meet the nomadic goat herds of the Ait Atta tribe, and even if you don’t, you’re likely to use one of the herders’ improvised Berber ladders—miraculous-looking things made of juniper branches jammed with rocks and dirt spanning otherwise impassable sections of trail. A pretty easy outing, just 15 minutes’ walk upstream from Taghia, is “the Source,” where thousands of gallons of potable spring water pour directly out of a cliff in a wide cascade, creating the river that drains the whole region. Above the spring is the desert. Below it, the valley is an oasis. “People don’t find this place,” Cloe says. “It finds people.” The baraka, the spirit of the place, “attracts people in search of a challenge—or a change.”

If you want to find yourself found, the most hassle-free way to get to Taghia is to email Kristoffer (Kris@ericksoncreativegroup.com). A self-service overland method is possible, but I’ll leave that to you.

Lowther is a producer and editor at Big UP Productions, which makes outdoor-adventure films. From our July 26, 2013, issue; Gem of Morocco.