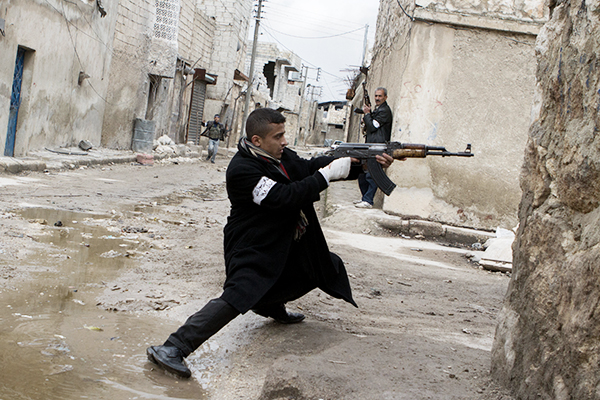 Report says some 500 Turks are battling Damascus alongside terrorist groups.

As many as 500 Turks, some of them trained at terrorist camps in Afghanistan and Pakistan, have crossed over into Syria to fight the Bashar al-Assad regime alongside Al Qaeda and its affiliates, a report from Turkey’s interior ministry claims.

Turkey’s government, which is fiercely opposed to al-Assad, has come under fire for allegedly turning a blind eye to militants and weapons crossing the country’s long border into Syria. The interior ministry report, published in several Turkish newspapers on Wednesday, said about 500 Turkish citizens had joined the ranks of the Al Nusra Front and the Islamic State of Iraq and Levant (ISIL). “Some have received training in Al Qaeda camps in Afghanistan and Pakistan,” the report says, according to press accounts.

Based on data collected by the National Intelligence Organization and police, the report said 13 Turks fighting alongside Al Nusra had been killed in Syria. It said another 75 Turkish citizens had been killed in the conflict, which first erupted in March 2011.

Officials from the interior ministry could not immediately be reached for comment.

Western reluctance to back more moderate rebels in the uprising against al-Assad has strengthened the position of radical Islamist fighters, including ISIL and Al Nusra. Al Nusra, created in January 2012, joined Al Qaeda in December of that year and is on a U.S. list of foreign terror groups. It has carried out some of the deadliest attacks against the Syrian regime, including several suicide bombings.

Turkish Foreign Minister Ahmet Davutoglu, on a trip to Washington last week, rejected charges that his country was allowing extremists to cross into Syria and called for greater intelligence cooperation to halt the flow. Turkey has taken in about 600,000 refugees from the Syrian conflict and also hosts the main opposition coalition.