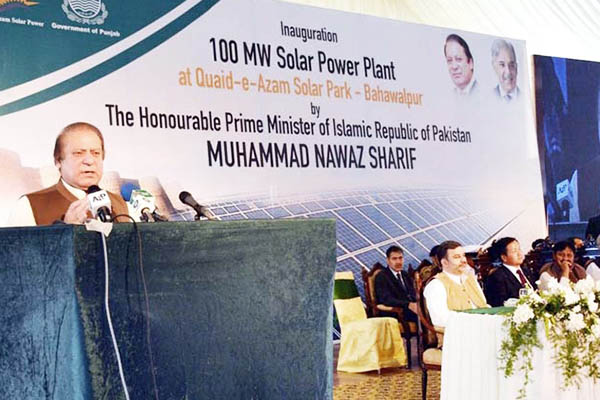 Pakistan on Tuesday inaugurated a 100-megawatt Chinese-built solar power plant, part of its efforts to battle its ever-increasing energy deficit.

The plant is the first stage of a project that will eventually cover over 10,000 acres of the central Cholistan desert and add 1,000 megawatts to the nation’s electric grid, making it one of the biggest solar parks in the world.

Pakistan faces an annual electricity shortfall of around 4,000 megawatts in the peak summer months of June and July when temperatures can reach 50 degrees Celsius in the country’s center.

Speaking at the ceremony, Sharif said that a solution to the energy crisis would soon be at hand. “Power cuts will be over by either 2017 or 2018 and the wheels of industry will start working,” he said.

Pakistan has signed investment agreements with China to build various gas, coal and solar energy projects that will provide 16,400 megawatts of electricity, roughly equivalent to the country’s entire current capacity.