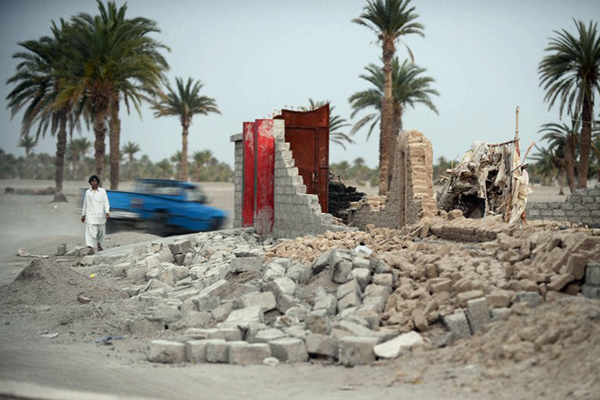 More than 12,000 Pakistanis have been affected by Tuesday’s 7.8-magnitude earthquake, a relief official said on Thursday.

The worst-hit town is Mashkhel, Balochistan, where the lack of paved roads, electricity, cellphone coverage, and medical facilities has hampered the rescue effort. “We have done a rapid survey and found that over 12,000 people have been affected by the quake in Mashkhel,” said Mehboob Ali, a district coordinator for the Balochistan Rural Support Programme charity. He said more than 3,200 homes, made mostly of mud, were either damaged or no longer habitable, forcing people to sleep out in the open or in makeshift shelters for a third night.

The military on Thursday continued to fly in medicine and tents, but more supplies are desperately needed, said local official Syed Mureed Shah. “There’s growing impatience among the people affected by the quake as they are not receiving relief goods,” he said.

Rauf Jamal Dini, an official with Quetta-based charity Sahar, also called urgently for more supplies, saying neither the military nor government authorities had been seen in areas visited by his aid workers. “People are making complaints. They are in dire need of relief goods. We are conducting a rapid survey to assess the damage,” he said.

But military and civilian officials said they were doing what they could. Sohail Islam, a district health official, said four doctors and 10 paramedics on the ground had treated around 170 injured people since Wednesday. “Most of the people have fractures and other injuries to limbs, and most are women and children. The seriously injured have been shifted to Quetta while the rest have been sent home,” he said.

Capt. Shoaib Elahi from the Frontier Corps paramilitary said troops had treated 85 injured people in Mashkhel, most of them women and children. “Now they have moved to their houses. We have only two beds in an FC, mud-built health facility, and only have two patients in the facility, a woman and an elderly man, whose beds are in open space,” he said.

Measuring 7.8 on the Richter scale, the epicenter of the earthquake—which struck at 3:44 p.m. (Pakistan time) yesterday and lasted 13 seconds—was 86 kilometers from the Iranian city of Khash, according to the U.S. Geological Survey. The seismic activity occurred 15.2 kilometers below ground. (On Wednesday and Thursday, aftershock ran through the same area.)