Despite the optimism resulting from Pakistan’s declining positivity rate, health experts have warned that the country has yet to fully utilize its claimed capacity of 71,780—and is testing significantly below numbers proposed by global health experts, likely only recording the most symptomatic patients while ignoring the spread among asymptomatic carriers.

Provincial Health Minister Dr. Yasmin Rashid on Tuesday told Samaa TV that the province’s testing had reduced because authorities were no longer testing incoming travelers. “Earlier, we used to test every incoming passenger in Punjab twice. After the new government policy, we are not testing any passengers,” she said, adding that only people who display symptoms are tested—a practice derided by international health experts because it ignores all but the most serious patients of COVID-19.

On Wednesday, authorities reported 5 new deaths due to COVID-19, raising total fatalities to 2,095. The province also reported 372 new infections, raising confirmed cases to 90,816, against 66,425 recoveries. There are now 22,296 active cases of the virus in Punjab province.

Provincial government spokesman Murtaza Wahab on Tuesday said Sindh had the lowest fatality rate and the highest recovery rate in all of Pakistan. “Unlike other provinces, Sindh is also doing contact tracing under which we have conducted 13,574 tests per million, whereas, Punjab conducted just 5,964 tests per million,” he added.

The provincial government on Tuesday announced it was postponing local body elections for at least two years due to the ongoing coronavirus pandemic. The government had already provided legal cover for this decision through the passage of a bill intended to curb the spread of COVID-19 by discouraging public gatherings.

The provincial government on Wednesday reported 6 new deaths, raising its death toll to 1,153. In the past 24 hours, its recoveries rose by 215 to 25,582, while its confirmed cases have increased by 280 to 32,523. There are currently 5,788 active cases of coronavirus in the province.

Spokesman Liaquat Shahwani told journalists in Quetta on Tuesday that around 80 percent of the confirmed coronavirus patients in the province had now recovered from the disease. He said the fatality ratio was one percent, which was a “good achievement.”

Confirmed cases of the novel coronavirus in the province on Wednesday rose by 28 to 11,469. Overall, 135 people have died and 9,381 patients have fully recovered from the virus, leaving 1,953 active cases of COVID-19. 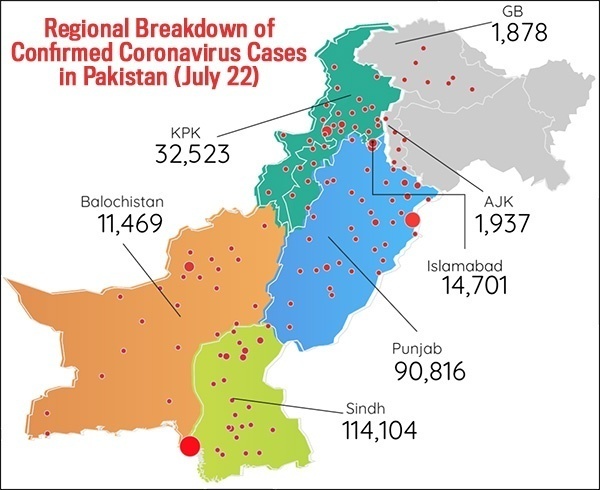 Confirmed cases of the novel coronavirus in Gilgit-Baltistan rose by 10 on Wednesday to 1,878. The region reported 2 new deaths, raising toll to 45, while its recoveries have increased by 4 to 1,485, leaving 348 active cases.

In Pakistan-administered Kashmir, confirmed cases have increased by 15 to 1,937. There were no new deaths and 21 recoveries in the past 24 hours, leaving 47 fatalities and 1,275 fully recovered. It has 615 active cases of COVID-19.

Globally, the virus has now infected more than 15,096,317 people, with over 619,520 reported deaths. Governments across the word halted flights, locked down towns and cities and urged people to stay at home at the peak of the virus’s spread, but there are now signs of easements in nations that have reined it in to help shuttered economies recover. Overall, around 9,113,043 patients of the 15 million+ infected have recovered thus far.