14 Killed, Over 25 Wounded In Suicide Attack 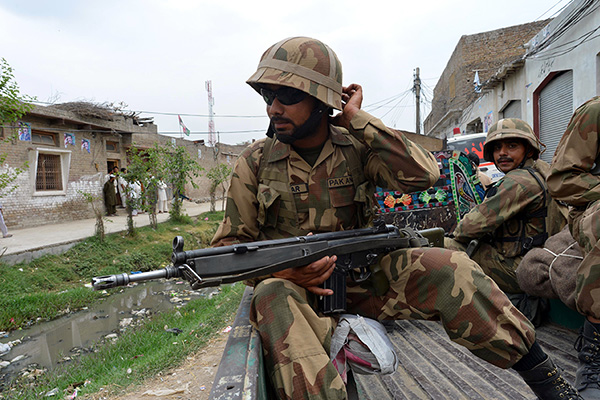 No group has claimed responsibility for the apparent sectarian attack on the outskirts of Peshawar.

A bomb attack on Friday killed 14 people and wounded over 25 others at a Shia mosque and madrassah on the outskirts of Peshawar, officials said.

“It was a suicide attack in which 14 people were killed and more than 25 others were wounded,” according to senior police official Shafi Ullah. “The suicide bomber, who was on foot, first opened fire at police guards who were deployed outside the mosque, then entered the prayer hall where he blew himself up amid worshippers just before the start of prayers,” he added.

The mosque and madrassah complex is located in Gulshan Colony, a Shia-dominated area on the edge of Peshawar, a city which abuts militant strongholds in the northwestern tribal belt on the Afghan border.

Jamil Shah, an official at the main government-run Lady Reading Hospital in Peshawar, had earlier said that medics had recovered seven dead bodies.

There was no immediate claim of responsibility for the attack, but sectarian violence targeting the Shia community—Shias account for 20 percent of Pakistan’s mostly Sunni Muslim population—has been on the rise in recent years.

Extremist Sunni militant faction Lashkar-e-Jhangvi claimed responsibility for a series of bloody attacks on the Shia in Quetta that killed at least 25 people on June 15.

Earlier on Friday, officials said two members of a pro-government militia were killed when militants armed with guns and rockets attacked their homes in the tribal district of Bajaur on the Afghan border.

About a dozen insurgents attacked the homes near Khar, the main town in Bajaur, late Thursday, administration official Abdul Haseeb said. The two elders, who were members of a pro-government tribal militia, were killed and two tribal policemen were wounded, said Haseeb.

A security official in the area confirmed the attack and the casualties: “Their targets were the tribal elders.”