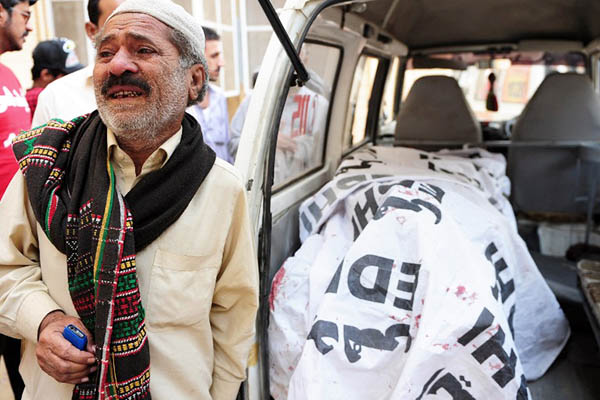 The clash, which according to police also injured 39 people, mainly schoolchildren, was the worst outbreak of criminal-related violence to plague the troubled city in recent months. It “erupted this morning when two gangs exchanged heavy gunfire” in the Lyari neighborhood, senior police official Faisal Bashir said, adding that school pupils had been hurt in the crossfire. “Later they fired RPGs and lobbed hand grenades at each other,” he added, saying the death toll was expected to rise.

Maj. Sibtain Rizvi, a spokesman for paramilitary troops, added that two gangsters had been killed and one had been arrested. Dr. Seemi Jamali of the Jinnah Postgraduate Medical Center, where some of the injured were taken, said three paramilitary rangers and two police were wounded. Bashir, the police officer, said one of the gangs suspected the other of providing a tip to police that led to the killing of a top leader.

According to police the firing began around 4:00 a.m. while major blasts were heard at noon. Din Muhammad, a 43-year-old resident who was being treated at Karachi Civil Hospital for a gunshot wound in his right leg, said he was sitting at the shop when he heard explosions.

“There was a big bang and then people were shouting and crying, I closed the shutter of my shop to run home but I saw people fallen, bleeding and screaming,” he said. “I was running toward a group of people lying on the ground a few yards away and then I fell to the ground” after being shot, he added. “My leg was bleeding and I could not stand up, I remained there for around twenty minutes and then local people came and brought us here,” he said.

An AFP reporter at the hospital said that some people, who were accompanying the wounded, started chanting slogans against security forces before briefly clashing with them. By Wednesday afternoon, some 200 police commandos had arrived on the scene to conduct a search operation after the clash had ended, said senior police official Shah Nawaz.

Lyari, one of the poorest and most violent neighborhoods of Karachi, is known for frequent violence between rival gangs. The area is largely dominated by ethnic Baloch belonging to the Pakistan Peoples Party (PPP), which rules Sindh province.

An operation launched by police and paramilitary government Rangers in the city’s tangled maze of streets last September had appeared to be having a positive effect, until this latest incident. But Tauseef Ahmed Khan, an analyst, said there was a nexus between the PPP and Lyari gangs which prevented authorities from arresting suspected criminals and confiscating their weapons.

“The current targeted operation has no effect on Lyari because the police and law enforcement agencies consider the gangsters of Lyari as their assets. No effort has been made to cut the supply of illegal weapons to Lyari and that is why today we have gangsters holding RPGs and firing at schoolchildren,” he said. “Today’s incident is the worst in the history of Lyari,” he added.

According to the Citizens-Police Liaison Committee (CPLC), 2,507 people were murdered in Karachi in 2013, the highest number since records began nearly 20 years ago.