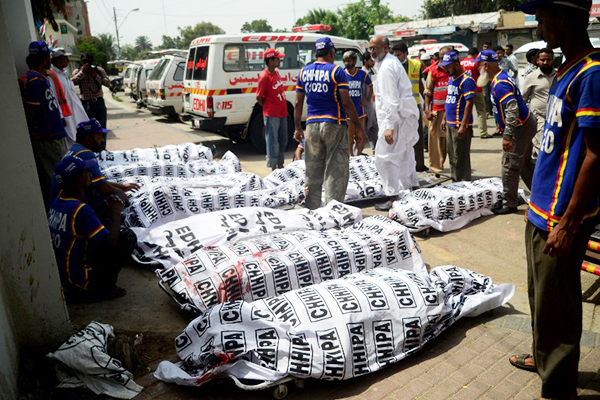 Taliban vow to continue bombings throughout the day.

In Peshawar, police said a bomb planted on a motorcycle and targeting women voters wounded eight people. “The motorcycle was parked outside a women’s polling station,” said Shafiullah Khan, a senior police officer.

A suicide bomber targeting another polling station in a Peshawar suburb was spotted by police and prevented from entering the building. He blew himself up without wounding anyone else, Khan said. “The target was a polling station, which was already declared as highly sensitive. The bomber blew [up] after police identified and shouted at him.”

In the district of Mardan, another four people were injured in a bomb blast close to a polling station. Police described it as a “low intensity timed-device.”

But despite the attacks and threats of suicide bombings from the Taliban, people are lining up to vote. In Badaber, a militant stronghold on the edge of Peshawar that has been repeatedly bombed, more than 300 people lined up at a polling station to cast their votes. In Peshawar, hundreds of people queued up, some of them in wheelchairs.

“We have already spent a lot of time being scared of terror threats. Today, we have to take a decision and bury this state of fear once and for all,” said shopkeeper Suhail Ahmad in Peshawar. “We have to vote for peace and the future of Pakistan. People must get out of their houses and cast their votes.”

In Karachi, a bomb targeting an Awami National Party candidate for the provincial assembly killed 11 people, including a child, and wounded 36 others.

The intended target, ANP’s Amanullah Mehsud, escaped unhurt, said senior police official Mazhar Nawaz. The Taliban, who have vowed to disrupt the vote with suicide attacks, have claimed responsibility. “We proudly claim responsibility for this attack, we carried it out and will carry out more of the same,” said Taliban spokesman Ihsanullah Ihsan.

There were queues outside polling stations in some areas of Karachi, but voting was more sluggish in other parts of the city where people spoke of security fears.

“This time I am more enthusiastic about voting than in the last elections,” said Mehar Rehman, 29, who works for a private company. “The media played a good role in motivating people … that they should not let their vote go waste.”

Voting was delayed at several polling stations in the city, as officials awaited the delivery of ballot boxes and papers. Election Commission official Najeeb Ahmed said that any delays at polling stations would be compensated by extending voting hours.