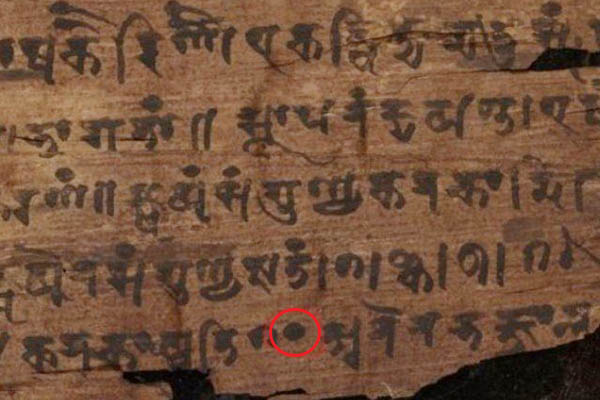 Third-century Indian manuscript contains first known use of the mathematical symbol, according to researchers

A black dot on a third-century Indian manuscript has been identified by Oxford University as the first recorded use of the mathematical symbol for zero, 500 years earlier than previously thought.

“Scientists from the University of Oxford’s Bodleian Libraries, have used carbon dating to trace the figure’s origins to the famous ancient Indian scroll,” the university said in a statement.

The birch bark scroll is known as the Bakhshali manuscript after the village, which is now in Pakistan, where it was found buried in 1881. It has been held at the Bodleian Libraries since 1902.

“The creation of zero as a number in its own right, which evolved from the placeholder dot symbol found in the Bakhshali manuscript, was one of the greatest breakthroughs in the history of mathematics,” said Marcus du Sautoy, a mathematics professor at Oxford. “We now know that it was as early as the third century that mathematicians in India planted the seed of the idea that would later become so fundamental to the modern world,” he said.

The Bakhshali scroll was already recognized as the oldest Indian mathematical text but its exact age was widely contested, and researchers used carbon dating to trace it back to the third or fourth century.

The text was in fact found to contain hundreds of zeroes, representing orders of magnitude in the ancient Indian numbers system.

The earliest recorded example of the use of zero was previously believed to be a ninth-century inscription on a wall in a temple at Gwalior in India.

Several ancient cultures, including the Mayans and the Babylonians, used the zero placeholder but the dot used in ancient Indian mathematics is the one that ultimately evolved into the symbol used today.

Librarian Richard Ovenden said the discovery was of “vital importance to the history of mathematics and the study of early South Asian culture.”

“These surprising research results testify to the subcontinent’s rich and longstanding scientific tradition,” he said.