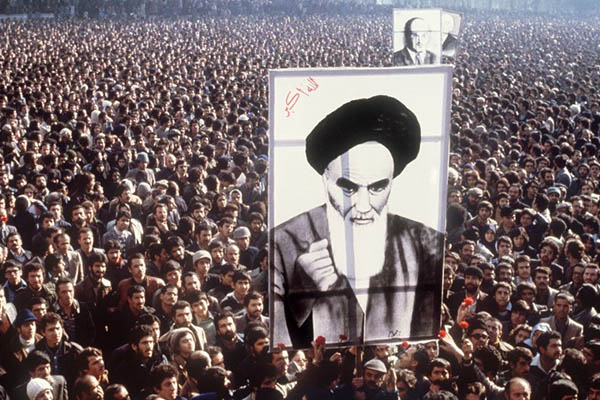 Protesters in Tehran hold a poster of Ayatollah Ruhollah Khomeini during a demonstration against the shah, January 1979. AFP

A series of dramatic events swept across the Arab and Muslim worlds in 1979, the aftershocks of which still reverberate today, 40 years later.

Here is an overview.

On Jan. 16, Iran’s last monarch, the pro-Western Shah Mohammad Reza Pahlavi, flees the country after months of protests against his regime.

The spiritual leader who led the uprising from exile, Shia cleric Ayatollah Ruhollah Khomeini, makes a triumphant return on Feb. 1. The shah’s government falls 10 days later when the army turns against him. The following day, public radio announces the fall of the monarchy and “the end of 2,500 years of despotism.”

An Islamic republic is proclaimed on April 1, its legislation based on Sharia law.

On May 5, Khomeini creates the elite Revolutionary Guards who will become the regime’s elite army. A drop in Iran’s oil output during the revolution drives up prices, sparking an energy crisis in Western economies.

On March 26, Egyptian president Anwar Sadat and Israeli prime minister Menachem Begin sign in Washington the first ever peace treaty between the Jewish state and an Arab nation.

The accord, inked in the presence of U.S. president Jimmy Carter, ends the state of war between the neighbors and sets the terms for Egypt to recover in 1982 its Sinai Peninsula, which Israel invaded in 1967. But Arab countries slam the treaty as a betrayal and break off relations with Egypt.

Sadat, also criticized at home, is assassinated in October 1981.

On June 16, 80 Syrian military cadets are massacred in a hail of gunfire and grenades after being assembled at their academy in the northern city of Aleppo. The men are from the Alawite sect of the Shia Islam minority, as is the president Hafez al-Assad, father of the current leader, Bashar al-Assad.

The instigator of the attack is a training officer from the Sunni majority, angered by the regime’s open favoritism toward Alawites.

The government reacts by cracking down on the Muslim Brotherhood, which undertakes an armed uprising before being crushed in the central city of Hama in 1982 at a cost of between 10,000 and 40,000 lives.

On July 16, Saddam Hussein becomes Iraq’s president as one of the strongmen of the Baath Party in power since a 1968 coup. He goes on to rule with an iron fist, drawing Iraq into a string of conflicts, including war with Iran, until he is ousted in the U.S.-led invasion of 2003 and executed three years later.

On Nov. 4, Islamist students seize the U.S. embassy in Tehran, demanding the extradition of the shah, who is receiving medical care in the United States.

Fifty-two diplomats will be held for 444 days. It leads to the rupture of relations between Washington and Tehran, still in place today.

On Nov. 20, more than 400 Muslim fundamentalists storm the holiest mosque in Islam, in Mecca, western Saudi Arabia, and take hostages from among the thousands of worshippers there. They claim to have with them the new redeemer, or Mahdi, whose appearance is predicted in several hadiths to cleanse the Muslim world of “impurities” introduced from the West.

Saudi forces launch an assault two weeks later in which at least 333 soldiers, rebels and civilians are killed. It is the start of the rise of Islamist extremism in Saudi Arabia.

On Dec. 27, Soviet troops invade Afghanistan to back its embattled communist government, leading to a nine-year occupation. It triggers an armed resistance by Afghan mujahideen backed by the United States and Saudi secret services.

Wealthy Saudi national Osama bin Laden plays a key role, recruiting mostly Arab volunteers to the insurgency and going on to inspire a worldwide anti-Western jihad, or holy war, as the head of Al Qaeda.