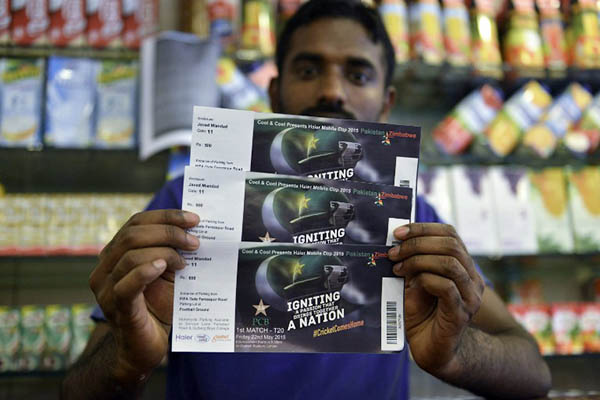 Pakistan appointed a local umpire who survived a 2009 terrorist attack on the Sri Lankan team for their home series against Zimbabwe after cricket’s governing body refused to send officials.

Ahsan Raza, now 40, will officiate during the series featuring two Twenty20s and three one-day internationals against Zimbabwe, who are set to become the first Test-playing nation to tour Pakistan for six years. Major cricketing nations suspended tours to Pakistan following the March 2009 assault on the Sri Lankan team bus in Lahore, which killed eight people and injured seven visiting players. Raza suffered multiple bullet wounds and fought for his life for over a month.

“The ICC’s decision has been made after receiving a report from its security consultant,” the council said in a statement.

The world body said it decided in April that the mandatory requirement of neutral umpires for international matches would be waived due to security conditions in Pakistan should the series with Zimbabwe go ahead. It gave assurances that the matches would still be considered official fixtures.

The Pakistan Cricket Board has said it received confirmation from Zimbabwe Cricket that the tour would go ahead. The tourists, expected to arrive early Tuesday, will play two Twenty20s (on May 22 and 24) and three one-day internationals (on May 26, 29 and 31)—all in Lahore.

Zimbabwe had suspended the tour on Thursday following an attack in Karachi, which left 45 people dead, before reversing the decision 24 hours later. No major foreign team has toured Pakistan for the last six years, forcing the national team to play all their home matches at neutral venues in the United Arab Emirates.

Ticket sales for the series started on Saturday, with police conducting a dress rehearsal of security arrangements. Pakistan has promised Zimbabwe security similar to that offered a head of state, with 6,000 officers involved.