Federal Education Minister Shafqat Mahmood on Monday announced that all educational institutions—schools, colleges, universities, tuition centers, madrassas—would be shifting to online learning/homework-based work from Nov. 26. No in-person classes would be permitted till Jan. 11, he said, adding that from Dec. 25-Jan. 10 all schools would be on winter break. He said a meeting of education ministers would be conducted in the first week of January to debate the coronavirus situation and future steps would be decided accordingly.

Despite being in the midst of a second wave of the coronavirus, the country has yet to fully utilize its claimed testing capacity of 74,407, and currently tests significantly below numbers proposed by global health experts. According to the World Health Organization (WHO), Pakistan’s testing policies likely only record the most symptomatic patients while ignoring the spread among asymptomatic carriers, which studies have suggested comprise the majority of infections in the country. 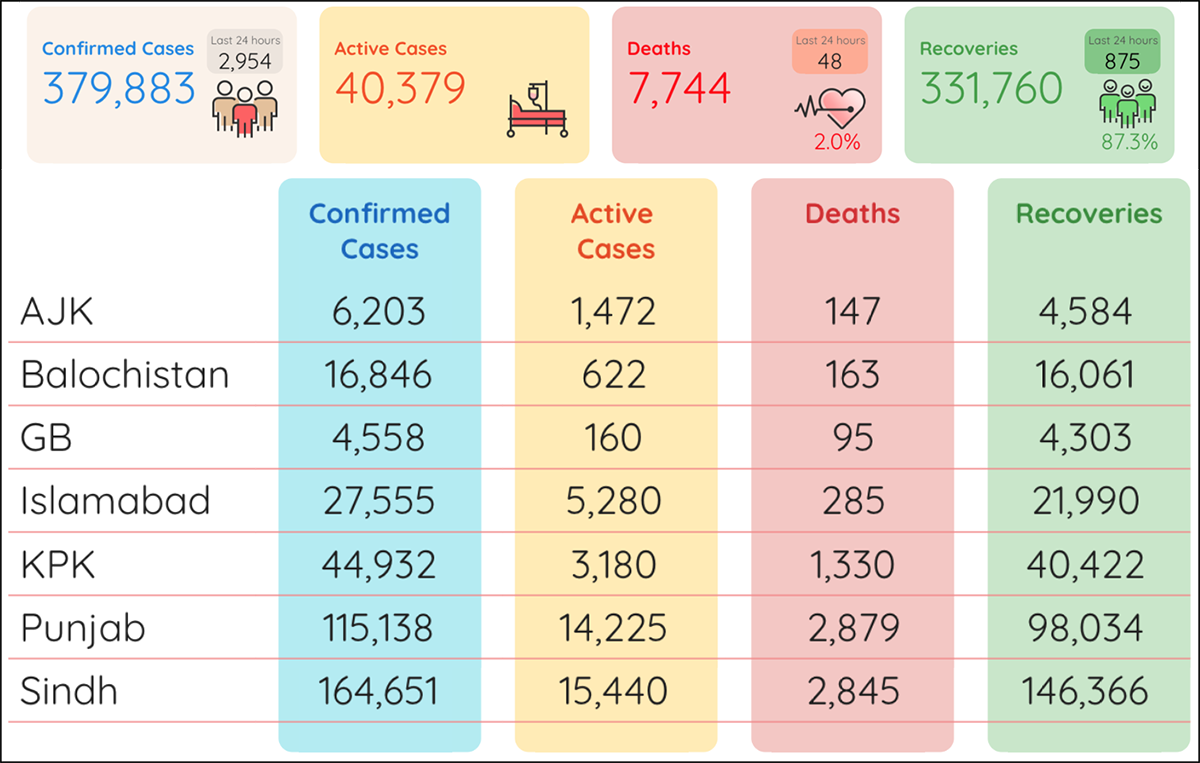 The provincial government has directed all public and private offices to immediately implement measures requiring 50 percent limit of their staff to work from home, with a notification issued by the Primary and Secondary Healthcare Department saying it would remain applicable until Jan. 31, 2021.

On Tuesday, authorities reported 18 new deaths due to the coronavirus, raising total casualties to 2,879. The province now has 115,138 total confirmed cases; it reported 630 new infections after conducting 15,678 tests, a positivity ratio of 4.01 percent. There were 15 new recoveries recorded, leaving 98,034 fully recovered, and 14,225 active cases of the virus.

Provincial capital Karachi has imposed new restrictions, banning indoor dining in all the city’s restaurants in a bid to curb the spread of COVID-19. The Karachi administrator, in a notification, said that dining would be permitted only in restaurants that can offer open-air seating.

Private schools in the province have rejected the federal government’s decision to close educational institutions nationwide, with a spokesman of the Khyber-Pakhtunkhwa Private School Network Association terming it a “political” decision and threatening protests if the decision is not reversed.

In the past 24 hours, the provincial government has recorded 333 new infections after conducting 4,392 tests, a positivity ratio of 7.58 percent. Overall, Khyber-Pakhtunkhwa’s confirmed cases have climbed to 44,932. It recorded 3 new deaths, raising toll to 1,330, while its recoveries have risen by 187 to 40,422. There are currently 3,180 active cases of COVID-19 in the province.

The province on Tuesday raised its confirmed cases to 16,846 with 36 new infections after conducting 602 tests, a positivity ratio of 5.98 percent. There were 2 new deaths and 30 recoveries in the past 24 hours, leaving 163 fatalities and 16,061 fully recovered. There are now 622 active cases of COVID-19 in the province.

The Islamabad administration has asked all government and private hospitals treating COVID-9 patients to increase isolation wards and arrange more beds and ventilators in the midst of mounting daily infections. Currently, 12 healthcare facilities have allocated isolation wards, 362 beds and 69 ventilators for coronavirus patients.

Confirmed cases of the novel coronavirus in Gilgit-Baltistan on Tuesday increased by 16 to 4,558 after conducting 313 tests, a positivity ratio of 5.11 percent. The region reported no new deaths and 15 recoveries, leaving 95 fatalities and 4,303 fully recovered people. There are currently 160 active cases of COVID-19 in the region.

Globally, the virus has now infected more than 59,514,826 people, with over 1,402,028 reported deaths. After a devastating first wave, the world is now reeling from a second wave of the coronavirus, with many countries imposing fresh lockdowns or targeted closures in a bid to curb the spread of the virus ahead of the upcoming winter holidays. Overall, around 41,156,663 patients of the 59.5 million+ infected have recovered thus far.