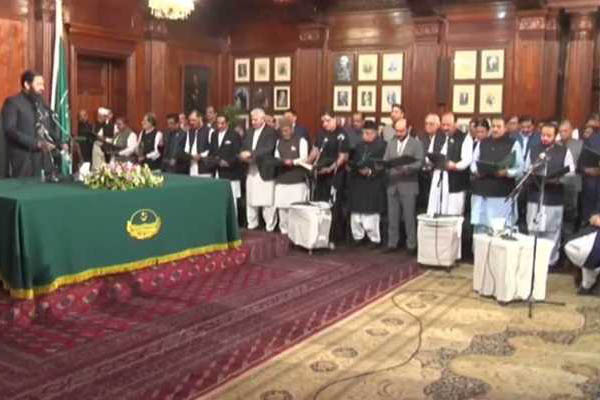 Screengrab of the oath-taking ceremony

Punjab Governor Balighur Rehman on Sunday administered oath of office as members of the provincial cabinet to 37 lawmakers, triggering protests from the opposition Pakistan Tehreek-e-Insaf (PTI) and Pakistan Muslim League (Quaid) who said it was in violation of the powers Hamza Shehbaz wields as “trustee” chief minister.

According to local media, the decision to immediately form and take oath of office from the provincial cabinet was taken during a meeting chaired by Prime Minister Shehbaz Sharif. It occurred less than 24 hours before the Supreme Court was set to resume its hearing on whether Hamza was the legally elected chief minister after all votes cast by lawmakers of the PMLQ were rejected by Deputy Speaker Dost Muhammad Mazari for acting against the instructions of party chief Chaudhry Shujaat Hussain.

Reacting to the oath-taking, PTI leader Chaudhry Fawad Hussain claimed it was a violation of court orders, as Hamza was not an “elected” chief minister. “They are making fun of the court orders. They are acting like the Sicilian mafia, which is a matter of concern,” he told journalists in Islamabad.

Similarly, PMLQ’s Pervaiz Elahi—who was knocked out of running for the chief minister through a letter written by Chaudhry Shujaat Hussain—said the cabinet could not be formed until the top court had decided on his petition challenging results of the runoff poll. Claiming this would not “save” the PMLN-led government, he said as a “trustee,” Hamza could not make any major decision and this decision was tantamount to contempt of court.