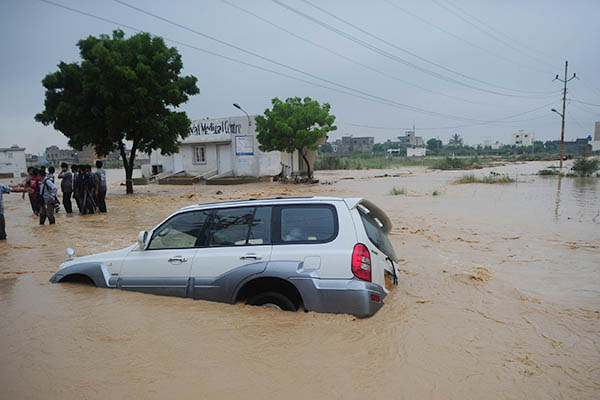 Flash floods caused by monsoon downpours have inundated some main roads in the sprawling port city and swept away homes in the northwestern province of Khyber-Pakhtunkhwa.

The National Disaster Management Authority warned that more thunderstorms and heavy rains were expected on Monday and some rivers may flood.

At least 45 people have been killed in the floods over the weekend. Officials in Karachi said at least 19 had died in the city to add to 20 dead in the northwest and six in the southwestern province of Balochistan.

Dr. Semi Jamali at the Jinnah Hospital in Karachi said that most of the deaths occurred due to electrocution or collapsing roofs and walls.

Army engineers helped relief efforts in Karachi on Sunday where roads and streets were flooded and the city was practically paralyzed, an AFP reporter said.

Authorities in the city of 18 million people, which contributes 42 percent of Pakistan’s GDP, said it would take more than two days to clear up after the water flooded markets, buildings and houses and blocked roads.

Hundreds of cars were seen half-submerged after poor sewerage and drainage systems choked due to garbage.

Pakistan has suffered devastating monsoon floods for the last three years, including the worst in its history in 2010 when catastrophic inundations killed almost 1,800 people and affected 21 million.