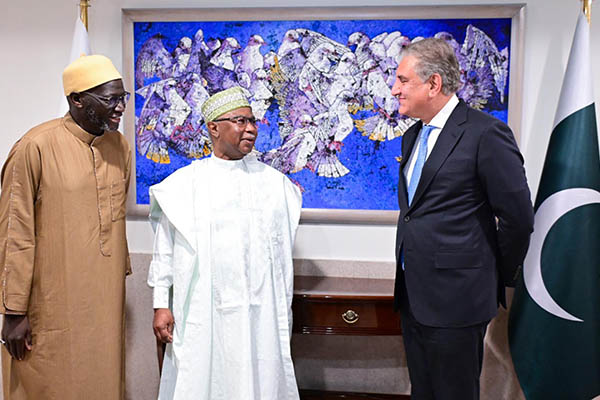 Annual meeting to review various issues facing the Muslim world under the thematic umbrella of ‘Partnering for Unity, Justice and Development’

The two-day 48th session of the Council of Foreign Ministers of the Organization of Islamic Cooperation (OIC) commences in Islamabad today (Tuesday), with an aim toward deliberating on various challenges facing the Muslim world under the thematic focus of ‘Partnering for Unity, Justice and Development.’

The annual meeting of the 57-member Muslim bloc includes the participation of ministers from 46 member states, while the rest are being represented by senior officials. Chinese Foreign Minister Wang Yi is attending the OIC session as a Special Guest, while senior officials from non-OIC countries, the U.N. and regional and international organizations such as the Arab League and the Gulf Cooperation Council are also in attendance. .

As the meeting coincides with the 75th anniversary celebrations of Pakistan’s Independence, the government has invited its participants to witness the Pakistan Day Parade as guests of honor on March 23 (Wednesday).

“I warmly welcome foreign ministers and delegations from OIC member states, observers, partners and international organizations to the 48th OIC CFM in Islamabad,” Prime Minister Imran Khan said in a posting on Twitter. Noting that the meeting would have “wide-ranging” deliberations, he added that the people of Pakistan were “honored” by their presence. The prime minister is set to deliver the keynote address at the inaugural session, with government officials saying his speech would shine a spotlight on Pakistan’s contributions to the OIC and the challenges currently facing the Muslim world.

According to a statement issued by the Foreign Office, the 48th meeting is particularly significant as it comes against the backdrop of opportunities and challenges facing the Muslim world in political, security, social and economic spheres. “Apart from an appraisal of the global and regional landscapes, the CFM will inter alia reaffirm the longstanding solidarity and support of its membership with the people of Palestine and Jammu and Kashmir; reiterate its resolve to combat rising Islamophobia; and discuss strategies to counter the effects of climate change, vaccine inequity and erosion in progress towards sustainable development goals,” it added.

The meeting is also expected to review and assess the grave human rights and humanitarian situation in India-held Kashmir, with the ministerial meeting of the OIC Contact Group on Jammu and Kashmir set to take place on the sidelines of the conference.

Last year, during the 17th Extraordinary Session of the OIC-CFM in Islamabad, pledges were undertaken to address the humanitarian situation in Afghanistan. The 48th meeting of the OIC CFM would review the situation in light of Kabul’s prevailing precarious situation. It would also take up many African issues, including the situation in Mali, the Sahel region, and Lake Chad, as well as the situation in Central Africa and the Republic of Guinea.

The OIC foreign ministers are also slated to discuss developments in Yemen, Libya, Sudan, Somalia, Syria, and other regions during the summit.

According to the Foreign Office, the ministerial meeting would consider and adopt over 100 resolutions on a broad range of issues, including peace and security; economic development; cultural and scientific cooperation; and humanitarian, legal, administrative and financial matters.

The Ministry of Foreign Affairs said that Pakistan had been an ardent supporter of the OIC as a founding member, adding that Islamabad had played a vital role in cementing the bonds of unity and solidarity, upholding respect for principles of international law, and fostering economic, scientific and cultural partnerships. “The hosting of this CFM by Pakistan represents an enduring tradition of convening high-level OIC summits and ministerial meetings since the establishment of the Organization,” it said, adding that it also reflected the abiding commitment of the people of Pakistan to promote the bonds of Muslim fraternity and foster cooperative partnerships.

This is the fifth time Pakistan is hosting a meeting of the OIC’s Council of Foreign Ministers; it previously hosted the 2nd session in December 1970; the 11th Session in May 1980; the 21st Session in April 1993; and the 34th Session in May 2007. Islamabad also hosted the 1st and the 17th Extraordinary Sessions of the OIC CFM in January 1980 and December 2021, respectively.