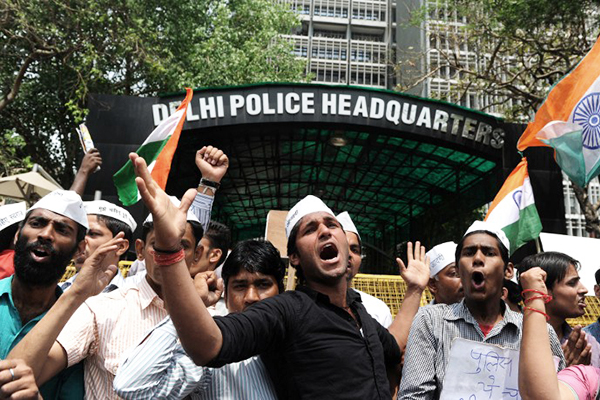 Protesters demonstrate in New Delhi; police have arrested a suspect.

Indian protesters staged fresh rallies on Sunday expressing outrage over the rape of an abducted 5-year-old girl in the capital, New Delhi.

The child is being treated at the top government hospital in the city. “She is in stable condition and showing signs of improvement,” said medical superintendent D. K. Sharma. “She is conscious and talking to her parents, doctors, and nurses, and it can be said there is no danger to her life now.” Later, speaking with reporters, Sharma said the child had been gravely injured. But “she is perhaps too young to understand the gravity of the situation,” he added.

The 5-year-old rape victim was being treated for serious internal injuries sustained during an ordeal that lasted over 40 hours, allegedly at the hands of a garment worker who was arrested on Saturday on suspicion of carrying out the attack.

The public revulsion following the attack and rape of the 5-year-old was similar to that demonstrated in Indian streets after last December’s brutal gang rape of ‘Nirbhaya,’ a 23-year-old student, on a bus in New Delhi. She died from her injuries. That case led to weeks of protests and a national debate over the status of women in India, putting the spotlight on the high incidence of sexual violence.

India’s prime minister reminded officials on Sunday of the protests in the wake of the gang rape in December and the latest attack, and urged them to address growing concerns over the “safety, security, and status of women” in India. “The gruesome assault on a little child a few days back reminds us of the need to work collectively to root out this sort of depravity from our society,” said Manmohan Singh. “The agitations that have followed the two incidents also point to the need for showing concern and sensitivity while dealing with the public anxiety that such incidents generate.”

Singh said his government toughened an anti-rape law after the December attack on ‘Nirbhaya’ by six men in a bus. “Our government has moved with speed in strengthening the law to be able to deal more effectively with offences against women,” he said.

Newspapers highlighted the rape of the child on their front pages for the second day on Sunday. “Seething Delhi erupts in protests,” Sunday Pioneer said in a headline.

Demonstrators carrying flags and posters reached the city’s main police headquarters to protest. Another group of protesters were outside the hospital where she is under round-the-clock observation.

The 22-year-old suspect, Manoj Kumar, described by media reports as a tenant in the child’s house, was apprehended after he fled to his in-laws’ home in the eastern state of Bihar. Police accuse Kumar of repeatedly attacking the child inside a locked room after kidnapping her on Monday in a lower middle-class area of New Delhi.

The toughened anti-rape law approved last month by Indian Parliament provides for a minimum 20-year prison sentence for gang rape, which can be extended to life in jail. It also provides for the death sentence if a rape victim dies or is left in a vegetative state. Under the previous law governing sexual offences, a rapist faced up to 10 years in jail.

Increasing punishment for rape perpetrators is the only way. I would seriously suggest castration for men who are convicted of rape. It would make other men think a hundred times.

urgent actions r required to punish rape perpetrator z only way to eliminate rape cases. if someone is punished severly like commiter, others will fell hasitation to commit ths blunder..