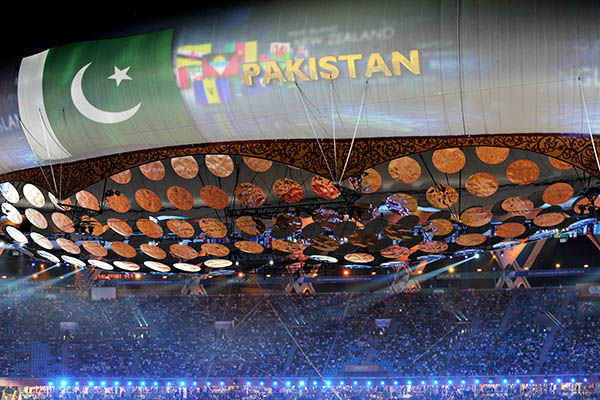 Pakistan at the 2010 Commonwealth Games in India. Indranil Mukherjee—AFP

This will be Pakistan’s 12th time at the tournament, with athletes participating in eight sports.

The Lahore High Court (LHC) on Friday said a group of athletes picked to participate in next week’s Commonwealth Games are free to attend the event following a long-standing tussle between two rival factions of the Pakistan Olympic Association.

The government reversed its backing to a faction opposed by the International Olympic Committee (IOC) last week, paving the way for Friday’s court order. “A 62-member squad will leave for Scotland to feature in the Commonwealth Games on Monday and we got a final go ahead,” Pakistan Sports Board (PSB) Director General Akhtar Nawaz Ganjera told media.

Pakistan won two gold medals in wrestling, one silver—also in wrestling—and two bronze medals in boxing at the last Games held in New Delhi in 2010.

Field Hockey, Pakistan’s national game, will be missing in this Games as the country’s federation failed to send its entry in time because of the ongoing tussle between the factions of the POA.

Pakistan’s main hopes will again be on wrestlers Azhar Hussain and Muhammad Inam. Hussain won a gold and a silver while Inam won a gold in New Delhi.