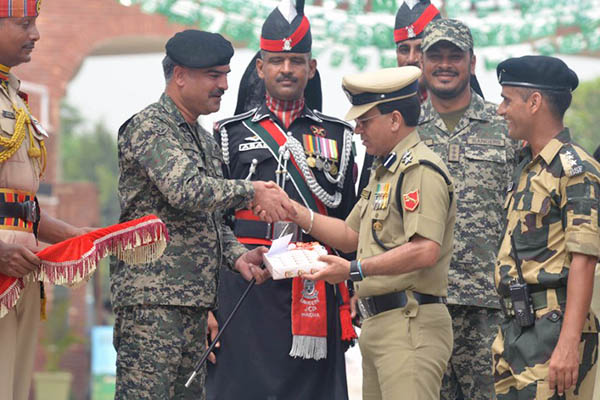 From barbed grins in a carefully synchronized daily flag ceremony to murderous exchanges across barbed wire in Kashmir, the Pakistan-India border is a 70-year-old scar that will not heal.

Thousands will cheer at the Wagah border crossing this week as the two countries celebrate the anniversaries of their independence, when British India was carved into two nations. The upheaval that followed left at least one million dead in a brutal migration that took millions of Muslims to Pakistan and millions of Hindus to India.

But all these years after the trauma of Partition, they have not agreed a border, nor their history—Pakistan marks independence on August 14 each year, India one day later. And the killing goes on.

Wagah, near Amritsar, is the only functioning border post between the rivals. The flag ceremony there draws crowds of up to 20,000 each day. There is wild applause as pumped-up troops, their eyes bulging, perform a stamping march toward the border gates at sundown.

The flags are lowered, a soldier from each side shakes hands with a forced smile and the gates close. Fists occasionally fly between Indian and Pakistani soldiers during the ceremony, but there is worse along the border.

Kashmir, divided between the rivals and claimed by both, is on a permanent conflict alert with near daily clashes and shelling across the Line of Control, the official name of the disputed frontier.

A woman relative of 28-year-old Muhammad Haseeb was killed as she worked in a field in the Nakyal sector on the Pakistani side just days before the Partition anniversary. “We don’t know when we will become the victim of a bullet,” he said.

Tens of thousands, mainly civilians, have died in Muslim-majority India-administered Kashmir in the past 30 years. India says about 40 militants have been killed this year trying to sneak across the border. Nine Indian soldiers have been killed on the LoC.

Cricket is the national game for both countries, but they have not played a five-day Test match against each other in either country since 2007. Indian Prime Minister Narendra Modi went to Pakistan in 2015. But ties are in deep freeze again since Pakistan detained and sentenced to death Kulbushan Jadhav, a former Indian naval officer it accuses of espionage.

For most politicians, observers and activists, India and Pakistan just cannot get over its split.

Pakistan has been in new political chaos with Prime Minister Nawaz Sharif ousted over corruption allegations. But some on both sides blame Modi’s hardline stance. “So long as there is a Hindu India that acts like a mirror to a Muslim Pakistan I don’t see any chance of a reconciliation,” said Mani Shankar Aiyar, an outspoken former Indian minister who as a diplomat was his country’s first consul general in Lahore.

Aiyar says that India and Pakistan need an Anglo-French style “Entente Cordiale” and then to get down to serious talks.

Prominent Pakistani political analyst Hasan Askari said both countries have grievances and that relations can barely get any worse. “The present tension between India and Pakistan is unnatural. Therefore I don’t expect this to stay as it is for all the time to come,” he told AFP. “As no dialogue is taking place, this relationship is really bad,” he added. “India has truly reduced this relationship to a single issue—terrorism—whereas the Pakistani argument is that we can talk about all contentious issues. They can be put on the table and discussed.”

Askari said there could be no talks while India obsesses about militant activity. “This means there’s hardly any possibility of a dialogue in the near future because the government of Pakistan can’t even commit to its own people that there’ll be no terrorist activity, not to speak of any commitment to India.”

Away from the politics and military posturing, Guneeta Singh Ballah, founder of the 1947 Partition Archive that has interviewed thousands of survivors of the partition, sees hope in the new generation on either side of the frontier. “The generation who did not go through the death and destruction had more hatred for the other side than their parents,” she said. “I think that the new generation is more engaged in wanting to get over the past,” she said.

If millions of expatriate Pakistanis and Indians can get along in the United States, Australia, Britain and the Middle East “why can’t they make it work at home?” she asked.