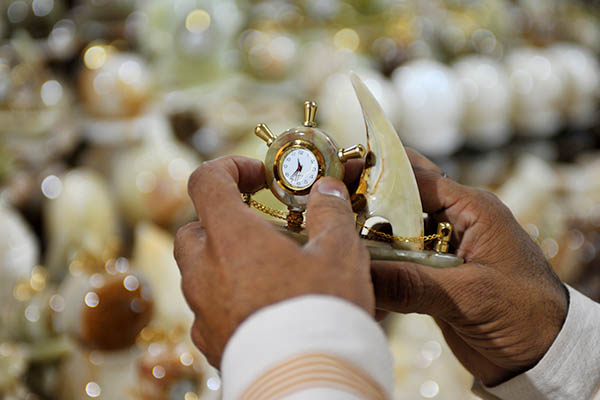 Focusing on the marble and food processing sectors, the project aims to create at least 750 new jobs in the province’s marble industry.

The grant, requested by the Kyber-Pakhtunkhwa government after the successful launch and implementation of the MTDF’s Economic Revitalization in KP and FATA Project (ERKF) over the past two years, is aimed at strengthening the critical value chains, or processing of raw materials prior to their sale, of two high potential sectors in the province—dimension stones (especially marble) and food processing.

Established in 2010, the MTDF for Khyber-Pakhtunkhwa, Federally Administered Tribal Areas and Balochistan is considered a key component in creating conditions for sustainable development following the Taliban’s 2009 takeover of Swat and the disastrous 2010 floods. Administered by the World Bank, it is supported by 11 donors—Australia, Denmark, the European Union, Finland, Germany, Italy, Netherlands, Sweden, Turkey, the U.K. and the U.S.

The 2009 and 2010 crises adversely impacted major infrastructure in the province, reducing both sectors’ competitiveness. According to the World Bank, the CIPK grant will reverse this trend by providing shared infrastructure and relevant skills along the marble sector value chain. The project will also address knowledge and coordination gaps in the food-processing sector.

The Khyber-Pakhtunkhwa government hopes to achieve these goals for the marble industry by establishing a machinery pool, a common facility and a training center for marble quarries in Risalpur Marble City. The CIPK grant will also help establish linkages with both domestic and international markets to maximize the gains from the value chain additions. In the initial phase, 25 marble mines will be targeted for enhanced productivity and 750 direct and indirect jobs will be created through skills training.

Similarly, the project will provide support to help develop the food-processing sector through value chain prioritization, analysis, feasibility studies and a cluster development program. Implementation agencies will also be strengthened to ensure that project objectives are met.

“We, along with our development partners, are committed to the development of Khyber-Pakhtunkhwa,” said Economic Affairs Division Secretary Nargis Sethi upon signing the grant agreement on behalf of the government. “This project will help in the creation and restoration of jobs and the provision of livelihoods for some of the province’s poorest communities,” she said.

“This project will enhance productivity and employment,” added Rachid Benmessaoud, the World Bank Country Director for Pakistan. “The marble and food processing sectors have been two of the worst affected economic sectors in Khyber-Pakhtunkhwa during the crises of 2009 and 2010. The sectors have huge potential to generate revenue and create jobs.”

This project was initiated by the World Bank under the Competitive industries Project for Khyber Pakhtunkhwa and the primary objective was to provide this machinery to the miners on SUBSIDIZED rates to promote modern mining techniques to consequently reduce environmental impacts. Instead, the govt chose PASDEC (a previously private business entity) to execute the project. As a result, the machinery is being rented out at EXACTLY the same same rates as other business enterprises, if not more. Lauding those rental rates as ‘subsidised’ is a joke. PASDEC is doing business and generating funds with assets requisitioned as a grant by the World Bank. And furthermore, no environmental assessment or impact of the project has been conducted. The govt doesn’t even have the HR do for such an undertaking.

The machinery rented out by the Project is not available elsewhere in Pakistan. If you know a source, please share as you have written that it is rented out at same rates as in market.