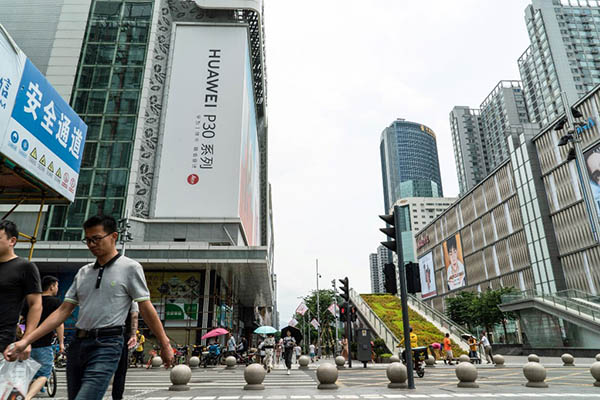 A street in the city of Shenzhen in China’s southern Guangdong province. Pak Yiu—AFP

China’s government has unveiled plans to boost the mainland city of Shenzhen and make it into what state media called a “better place” than neighboring Hong Kong, following another huge pro-democracy rally in the semi-autonomous financial hub.

Weeks of rallies, demonstrations, and occupations have plunged Hong Kong into crisis—which Beijing is now framing as an opportunity for Shenzhen’s development. On Monday, state-run media outlined a set of guidelines released by the central Chinese government that aims to turn Shenzhen into a pilot area of “socialism with Chinese characteristics.”

Without giving much in the way of specific details, the policy document included goals such as transforming Shenzhen’s “economic strength and development quality” into one of the best in the world by 2025. It also outlined an intention to build greater integration with Hong Kong and Macau.

By 2035, the southern Chinese city will “lead the world” in overall economic competitiveness, the document said. But Hong Kong is at risk of falling behind, hinted the nationalist state-run Global Times, citing experts.

“If Hong Kong is still not ready to embrace opportunities to join the country’s development… the city’s development would be ‘very limited in the future while Shenzhen is running at a much faster speed’,” said Tian Feilong, a professor at Beihang University, speaking to the Global Times.

Shenzhen’s gross domestic product (GDP) was behind that of Hong Kong in 2018, according to end-of-year exchange rates, but grew at a fast 7.6 percent clip year-on-year to 2.4 trillion yuan ($352 billion). Hong Kong’s economy clocked in at 2.8 trillion Hong Kong dollars ($363 billion) in 2018 but at a slower 3 percent growth rate. Shenzhen’s Composite Index, which tracks stocks on China’s second exchange, closed up more than 3 percent on Monday.

Published on Sunday, the timing of the policy document coincided with the eleventh week of demonstrations in Hong Kong—the biggest challenge to China’s rule of the semi-autonomous city since its 1997 handover from Britain.

Initially triggered by opposition to a planned extradition law, the protests have evolved into a wider movement for democratic reforms. The former British colony of Hong Kong operates under a “one country, two systems” framework, which gives citizens rights unseen on the mainland, such as freedom of speech.

Across the border, Shenzhen sits behind the country’s “Great Firewall,” which restricts access to news and information, but has risen to become a symbol of the transformative reforms China launched 40 years ago. The policy document said that individuals who are from Hong Kong and Macau but work and live in Shenzhen would be treated as residents.

The guidelines also support creating a “more open and convenient” entry and exit system at its borders, and allowing foreign permanent residents to launch science and technology enterprises—potentially trying to encroach on Hong Kong’s territory as an easy place for international businesses to be based.

After it was given Special Economic Zone status, Shenzhen transformed from a sleepy fishing village to a technological juggernaut. The city is already a key part of Beijing’s “Greater Bay Area” policy, which plans greater integration between Hong Kong, Macau and mainland Guangdong province, where Shenzhen sits.

However, experts expressed doubt on how easy integration would be. “Because of the ongoing political crisis, China is increasing inspections at the border between Shenzhen and Hong Kong, and that undermines this grand integration projection,” said Ben Bland, director of the Southeast Asia project at the Lowy Institute. According to Sunday’s policy document, Beijing is keen to pull the three regions even closer—“enriching” the practice of one country, two systems and “continuously enhancing the sense of identity and cohesiveness of Hong Kong and Macao compatriots” via cross-border cultural activities.