Home Lightbox A Blow From BRICS?

A Blow From BRICS? 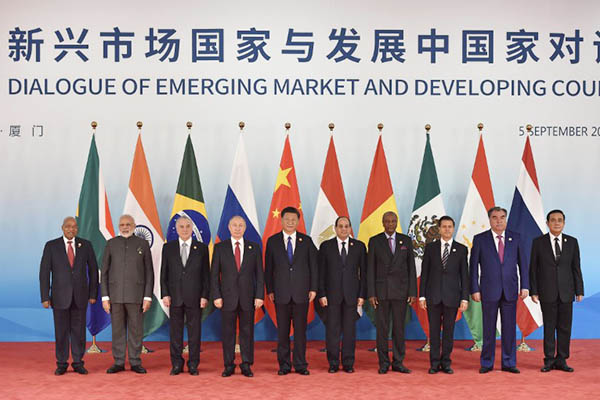 The BRICS declaration issued on Monday at Xiamen, China, has alerted Pakistan to a changing global view of its state identity. BRICS—a coalition of major emerging national economies Brazil, Russia, India, China and South Africa—was formed with intent to “reform global financial institutions like IMF and World Bank.” In its declaration earlier this week, it expressed “concern on the security situation in the region and violence caused by the Taliban, ISIL/Daesh, Al Qaeda and its affiliates including Eastern Turkistan Islamic Movement, Islamic Movement of Uzbekistan, Haqqani Network, Lashkar-e-Taiba, Jaish-e-Mohammed, TTP and Hizbut Tahrir.”

Islamabad’s initial shock at China’s acquiescence in the reference to the inclusion of Jaish-e-Mohammed was somewhat allayed by local media: wasn’t the terror group already banned, and as such no longer in existence? China backed this narrative by reminding Pakistan that it had recently vetoed the United Nations Security Council from sanctioning Jaish chief Masood Azhar as an internationally designated terrorist. The inclusion of the Haqqani Network in the list of terrorist organizations of concern jolted the official spokesmen and there was no way of explaining it away except by resolutely denying that it had any safe haven in Pakistan. But the reaction from Defense Minister Khurram Dastgir Khan was a giveaway when he added the word “complete” in his rejoinder: “We reject this thing categorically; no terrorist organization has any complete safe havens.”

Pakistan has long been internally destabilized by jihadi outfits; a fact repeated by several analysts on TV while commenting on the BRICS declaration. Particular mention was made of Jamaatud Dawa, led by Hafiz Saeed, who is known to also be secretly directing the erstwhile terrorist Lashkar-e-Taiba mentioned in the BRICS declaration. Jaish-e-Mohammed is banned in Pakistan but its leader Azhar is allowed free reign despite being wanted for terrorism in India, just like Hafiz Saeed.

The frightening truth is that after India increases its profile in Afghanistan on the advice of President Trump, Pakistan may opt to redeploy these outfits against the Indian projects there. And China’s willingness to allow reference to these organizations in the declaration signals Beijing’s concern about the China-Pakistan Economic Corridor’s security in the face of a menace Pakistan countenances but doesn’t control.