Home Lightbox A Boy and His Dog

A Boy and His Dog 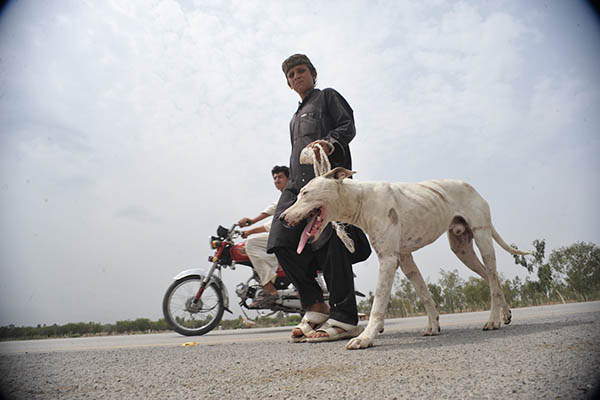 An 11-year-old internally displaced person’s journey from his home in Mir Ali to Bannu.

Eleven-year-old Minhaj-ud-Din walked over 40 kilometers from his home in Mir Ali to Bannu with nothing more than the clothes on his back. Surrounded by families, many fleeing the military offensive in North Waziristan that started on June 15, he stands apart. Orphaned in a drone strike two years ago, his extended family abandoned him after he refused to leave with them a week earlier. But don’t tell him he’s alone; as he is quick to tell anyone who’ll listen, he has Moti to keep him company.

“This dog is my universe,” Din told Newsweek as he reached Khyber-Pakhtunkhwa province. Parched and starving, he slurped down a glass of water, taking care to give some to his traveling companion. Seeing Din staring at an ice cream vendor, a passerby offered to buy him some. “Please buy one for my Moti too,” he pleaded. “He’s more loyal to me than anyone else.”

Din’s parents were both killed in a drone strike approximately two years ago—shortly after he adopted Moti as his pet. “We [siblings] were sleeping in a different room when we heard an explosion in our house,” he said. “When we looked, it [drone] had killed both my parents.” Din, who has three younger brothers, said his father had been a vegetable vendor when he was killed. “We moved in with our uncle and his family after that,” he added.

Petting Moti (pearl), Din said his uncle had urged him to leave with his family, but he hadn’t wanted to leave his hometown. They then took his brothers and left him to fend for himself. “I have no reason to fear the military operation,” he said. “They [drones] already killed my parents. How much more pain can they possibly cause now?”

However, Din finally decided to leave after his dog’s yelps of fear proved too much for him. “There was terrible bombardment in my hometown [Hassu-Khel] and Moti was terrified. He would keep yelping and jumping. I couldn’t stay as long as he wasn’t well,” he added.

Traveling with Moti came with its own drawbacks, according to Din. “I tried to find shelter in a mosque at night,” he said, “but the people there wouldn’t let me enter with Moti.” Instead, he said, he chose to spend the night under a nearby shop’s awning so he could stay with his dog. “We saw many destroyed shops and houses on our way,” said Din. “But I was too distracted with Moti to pay much attention to what was going on.”

At least 300 militants have been killed in the military’s ongoing Operation Zarb-e-Azb, according to the ISPR. Displaced tribesmen have claimed that dozens of civilians have also been in the airstrikes but there is no way to verify this, as journalists are not permitted in North Waziristan. Since the operation started, almost 500,000 civilians have fled the region—over 50 percent of the tribal area’s population, according to estimates.

As Din and Moti reached the Saidgai checkpost, where internally displaced persons are registered and administered the polio vaccine before being allowed to enter Bannu, an official motioned toward him to receive the vaccine. “Please administer a few drops to Moti as well,” he said politely.

Din doesn’t know where his family has gone and has no way to find them. This doesn’t seem to concern him. “As long as Moti is happy in Bannu, I will be happy to live here,” he said. “It all depends on him.”

Such a lovely story.

Do you armchair commentators ever have anything constructive to say? When the military wasn’t going in to N. Waziristan, you’d say they’re not doing enough. But when they went in, you say they are killing innocent civilians. This is a military that is far underequipped as compared to the U.S. Military, yet even the US military weren’t capable of preventing civilian casualties. So how about you stop spewing hatred, bro? What’s the point? It really won’t achieve anything except getting hated in return. More hate, more conflict, and this way its never gonna end.

No words..
and no forgiveness

Seems a made up story, it is a fighting-dog this boy is carrying and no vegetable vendor is expected to keep it as itz costly. I may be wrong, only Allah knows the truth. These poor Muslims are suffering a lot, may Allah have mercy on us, may this infighting stop. It is extremely painful to see Muslims killing each other. May Allah reunite us.

i have tears in my eyes

can Imran khan take notice of this brave kid.Give him food and shelter;stipend to study and train his dear Moti .

Imran Khan, surely, will do and has been doing this. But my brother, these IDPs are residents of FATA which comes under the direct administration of the federal government. The “take-care” of these helpless and poverty stricken people is thus the responsibility of the federal government. Sind has officially banned the entry of these poor Pashtuns in their territory and Punjab has unofficially banned them on Punjab. KPK being the Pashtun province cannot do so. People unaware and ill-informed of the statute of the country are quoting them as KPK’s government responsibility.
We Pashtun, however, can never ever say no to these brothers.

Din: If you get a chance, ask your elders that why did they fight for “Pakistan” in all its wars and particularly the one in 1948 which resulted in the capture of “Pakistan Occupied Kashmir” . Your elders ,the Mehsud, Wazir and other Pashtuns , won 1/3 of Kashmir for Pakistan but have now lost their own land to Pakistan.
What a reward; Keep loving Pakistan.