Home Lightbox A Charge to Keep

A Charge to Keep 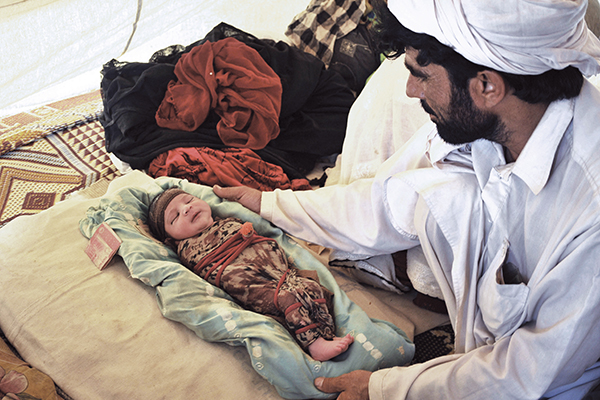 Azb, born at Bakkakhel camp on June 28, with his father. Hasham Ahmed—AFP

Pakistan must not disappoint the heroism of its IDPs.

The refugee camp for North Waziristan’s internally-displaced persons in Bakkakhel village, Khyber-Pakhtunkhwa, has far fewer people than it can hold. On July 7, there were only 67 families residing there. This number is only now slowly picking up.

The Bakkakhel camp is well-organized and well-stocked: it has electricity and a clinic. Its tents are segregated out of respect for the women who wish to observe purdah. It is absent the long lines and clamor for food and cash that have been reported at other camps and distribution points. The underutilization of the camp owes to the Pakistani Taliban’s threat to attack all those taking aid from the Army. Indeed, most of the million or so who have been left homeless from Zarb-e-Azb, the military operation in North Waziristan, have streamed into Bannu town, some 10 kilometers away, to live with their relatives or friends.

Bakkakhel is a strangely moving place, with resilience writ large on the war-weary, weather-lined faces of most people there. “We had lived for too long in fear and oppression,” said Aziz Khan, one of the refugees. Khan was bright-eyed about the operation, convinced that it will cleanse his land of militants. A few days earlier, his wife gave birth at this camp to their son, Azb, named after the military operation. Khan believes his family’s sacrifices and present-day hardships are necessary to secure his children’s future when they return home.

The women I spoke with were equally sanguine. They believed with great certainty that better days awaited them and North Waziristan; that their sacrifices would serve the greater good; and that security, stability, and peace would also mean development, prosperity, and education for their children.

I traveled to Bakkakhel last month with two truckloads of food and battery-operated fans donated by individuals in Lahore. Over Eid, we sent another consignment with fabrics and sewing machines. A third consignment—with medicine, blankets, utensils, sanitary items, and bottled water—is now being put together. These Pakistanis require whatever assistance the rest of us can provide. This will be as necessary after they have returned home to remake their lives.

My journey was motivated by another reason as well. Almost a year after our marriage and some months after his father, Punjab’s governor Salmaan Taseer, was assassinated, my husband, Shahbaz, was kidnapped from Lahore. This was three years ago. It had long been suspected that he was being held somewhere in North Waziristan. Since Zarb-e-Azb started, there has been no word about Shahbaz or any of the others taken by groups affiliated with the Pakistani Taliban. At Bakkakhel, among the people whose land he may have shared, I felt close to him. I wanted to ask the refugees if they had ever sighted Shahbaz or heard reports of where he may have been kept, but that would have been selfish. Those who discovered who I was came up to me, offering me their prayers. And so we prayed, for his future and theirs.

The plight of the internally-displaced has been edged out of the news cycle by the ongoing and needless political drama unfolding in fits and starts in Islamabad. Pakistan’s politicians who have come to Bannu district for brief photo ops with these refugees would do well by them and by Pakistan if they were to focus their energies on their care and assistance. Pakistanis from the tribal areas have and will continue to bear the brunt of the war against terrorism and extremism. We shouldn’t test their resolve or take their hopefulness as an unchanging given.

Pain often induces withdrawal. It is only by looking beyond one’s own self that solace can be found. Those at Bakkakhel, with their untold stories of heroic determination, are an inspiration. They are hopeful even though their lives have been uprooted and their future cannot be vouched for. I pray for them every day. Our salvation rests in meeting their hopes.

Moving article. Prayers all around :'(