Home Lightbox A Duty to Disclose

A Duty to Disclose 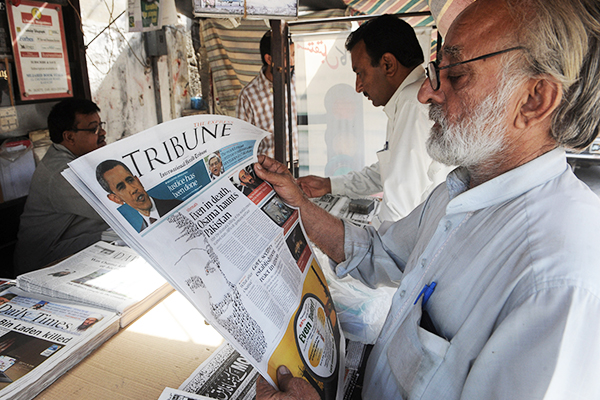 Should ‘The Express Tribune’ shut down?

[dropcap]I[/dropcap]n some cases, the headline says it all. “Liberal newspaper Express Tribune cowed into silence by Pakistani Taliban.” And in this case, the headline is accompanied by a close-up of a fulminating Imran Khan captioned, “Imran Khan, the cricketer-turned-politician and head of Tehreek-e-Insaf, which is spared criticism because of its support for the Pakistani Taliban.” So really, what else is there to say?

One could mourn the death of a free press but that’s already been done. One could connect the dots implied in the caption, i.e., that Imran Khan is to the Pakistani Taliban as Quisling was to the Nazis—but that, too, has been done to death and beyond.

Speaking for myself, I would say that there is more to say. I’m not sure whether the management and ownership of The Express Tribune intended to be as frank as they were, but their words are now a matter of record. And what the record reveals is that the ownership of the Tribune directed its staff to ensure that there was “nothing against any militant organization and its allies like the Jamaat-e-Islami, religious parties and the Tehreek-e-Insaf” as well as “nothing on condemning any terrorist attack,” “nothing against TTP or its statements” and “no opinion piece/cartoon on terrorism, militancy, the military, military operations, terror attacks.” In the words of the editor, Kamal Siddiqi, “we have decided that we won’t do anything at least for the foreseeable future that will come back to haunt us.”

I’m not a journalist but I’ve been around newspapers and journalists for a long enough time to earn the right to an opinion. And I call bullshit on this one. This is the decision that will come back to haunt you, Mr. Siddiqi.

Am I being impossibly idealistic here? Possibly. Am I being unfair? Again, possibly. Let us look at the arguments from the other side.

The short version of what the Tribune has to say in its defense is that it is a matter of self-preservation. In the words of Siddiqi, “We are on our own. We have to look out for our own people.” The slightly longer version is that since commentators like I do not have responsibility for the lives of employees and since our lives are not on the line, we have no basis on which to criticize the newspaper for choosing to protect itself.

With great respect, I disagree. Owning and running a newspaper is not a purely private activity. It is a public activity and it involves a commitment to the public. More importantly, it is a choice.

Suppose a judge announces that due to threats by a litigant, he has decided to rule in favor of that litigant. Nobody would respond by saying that threats are a fact of life. Nobody would give any weight to the eventual judgment. Instead, the judge would be told that he has to quit.

Newspaper owners do not swear an oath to the public in the same manner as judges. But the situation is not all that different. The Tribune may not have a motto reading “All the news that’s fit to print” but neither does it have a motto reading “All the news we’re not too scared to print.” Newspapers demand respect and recognition as institutions tasked with a public responsibility. They cannot simultaneously demand that respect and shirk that responsibility.

What then should the Tribune people do? Shut down the newspaper?

The answer to that question is, no. The Tribune should not close down. But what it should have done—and what it should still do—is to announce its limitations to the public. There should be a black-bordered box, somewhere on the front page of the paper, telling readers that this paper does not criticize the Pakistani Taliban, the Jamaat-e-Islami and the PTI because of threats received to its employees. That way, the reader is at least put on notice that the reality being presented to him is not complete.

When someone approaches an arbitrator, it is the obligation of the arbitrator to disclose all of his conflicts and his limitations. If the parties then still choose that person as an arbitrator, they do so knowing that the arbitrator has limitations and biases. But their choice is then a conscious and informed choice. The readers of the Tribune also deserve to be told about the limitations of the Tribune so that they too can make a conscious and informed choice about the value of the product being sold to them.

Let me make one final point here. There are many responsible for the current state of this country but the PTI deserves particular mention. Lest we forget, The Guardian has publicly identified the PTI as an entity which “is spared criticism because of its support for the Pakistani Taliban.” The paper may not be right, but the fact that the West views our second-largest political party in those terms is itself a matter of national shame.

In any event, I don’t think The Guardian has it wrong. PTI chief Khan has recently argued that we should not oppose the Pakistani Taliban because in the event of a military operation, then-Army chief Gen. Ashfaq Kayani said our chances of success would be only about 40 percent.

To begin with, Khan’s recollection is wrong—as has been pointed out by none other than Kayani himself. More importantly, Khan’s logic is wrong. The question is not whether our chances of victory are good; the question is whether we are willing to live with the alternative.

Prior to our acquiring a nuclear weapon, it was common knowledge that Pakistan was unlikely to prevail in a war with India. But no Pakistani leader ever called for surrendering to India. Similarly, it doesn’t matter what the chances of success against the Pakistani Taliban are. What matters is whether we are willing to live by their rules.

The opinions expressed in this column are the author’s.

You are a national shame as a journalist.

It is disturbing to know whats going on and I agree with you completely. The Tribune should not close down; rather as you have stated, announce its limitations to the public, informing readers that cannot criticize the Taliban, Jamaat-e-Islami and the PTI because of threats made to its employees”. Sad to see there is no freedom of press or media for that matter.

Well argued points and frank exposure of hypocrisy. Imran Khan told a lie and was exposed by Kayani but the lie sticks.
PTI espouses the cause of supremacy over law for militants against all the tenets of equality under law or Insaf which it proudly mis-represents.
The Express Tribune was being bullied for telling the truth. It has bowed down to this bullying. Most Pakistanis that I speak to could not care less that silencing journalists is tantamount to supporting slavery. We do not prize our freedom, we do not deserve it.

Shame on you, Imran (Also Ran) Khan! It is Taliban apologists like you who are the cause of the ruination of this country.

Feisal Naqvi, your bias against the PTI is illogical and unreasonable ! Imran Khan never said we should not oppose the TTP as the army had only 40% chance of success ! You really do twist everything he says to suit your purpose ! Shame on you ….you are despicable .
As for the Express Tribune not criticising Imran or the PTI ,where do you live man ? The paper is full of criticism of him and his party ! On the other hand , PPP is never ever criticised as everyone knows how close the owners are to Zardari .
Once again ,shame on you for being such a biased writer !

What an absolute nonsensical piece of writing!

Secondly, saying that Pakistan’s image is what the West make of it.
WHY DO YOU CARE SO MUCH ABOUT WHAT THE WEST THINKS, WHY? Is Pakistan the sum of EU and America’s opinions?

Also, you are misinformed as Kayani said that the chances of successful NEGOTIATIONS and not of a successful operation are 40%.

IS THE EDITOR SLEEPING??

The express tribune already has a psycO policy. There was a list with same restrictions before attacks

What kind of a dumb idiot are you? You and your gutter kind rightly deserves whatever comes their way. People of Pakistan are sick and tired of constantly being fed crass lies by so called journalists. Bloody asses the whole lot of you.

A great piece to expose the dirty faces of the Taliban apologists like imran khan. Keep up your pen. I second your suggestion that ET should put a notice on its newspaper that it is not criticizing certain terrorist groups and their apologists. Well written.

SICK AND TIRED of the damned TTP, JI, etc, etc…when on earth will these animals (TTP) and their concubines (JI) be eliminated??…

Once again, no article is complete without the mention of PTI. It is almost as if PTI is the cancer in your body that you’re adamant to dissect and remove.