Home Culture A Good God Is Hard To Find

A Good God Is Hard To Find 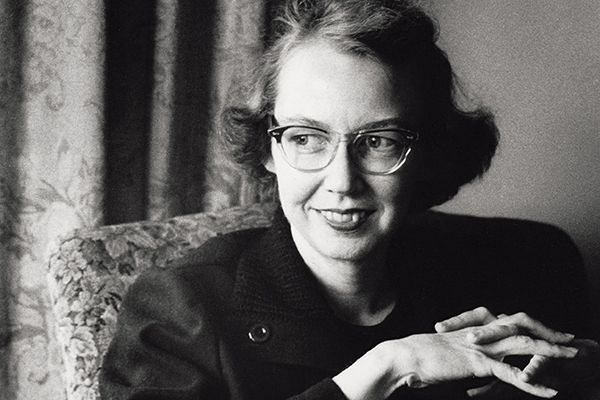 Courtesy of the estate of Joseph de Casseres

[dropcap]N[/dropcap]o conviction in modern theology is more foolish than that of a nice God, a benevolent genie eager to grant our wishes, to fulfill the “purpose-driven life” we were always meant to lead, but just hadn’t prayed quite hard enough for.

The deity marketed by sanctimonious salesmen like Joel Osteen and Rick Warren is not the same God who ordered Abraham to slay his son, nor the one who let his own son perish on Golgotha. “Abandon Fear and Build Something Awesome,” advises the subtitle of one recent work of “theology.” Sounds nice, but the Book of Job suggests otherwise.

Flannery O’Connor wanted to “build something awesome,” I suppose, though hers was the severe God who demanded our faith, not the one who lavishly rewarded us for showing up on Friday night or Sunday morning. A native of Savannah, Georgia, she had come in 1946 to study writing at the Iowa Writers’ Workshop. She would publish her first novel, Wise Blood, six years later while living on the farm in Milledgeville, where she raised birds. A Good Man Is Hard to Find—maybe the best short-story collection of the last century—came three years later. Nine years hence she was dead from lupus, which had also taken her father. A year later, Everything That Rises Must Converge, another story collection, would make her a rival of Faulkner in the Southern canon.

But whereas Faulkner’s prose is humid with an enfeebling gloom, O’Connor is able to laugh at catastrophe. Her characters are exalted because they are written about, their abjectness made known to the world through her stories. Here she is, in “Good Country People,” writing about Mrs. Hopewell and her daughter, who was born “Joy” but has chosen the name Hulga. The mother will not use the new name, but the caretaker, Mrs. Freeman, does:

“[Mrs. Freeman] did not call her that in front of Mrs. Hopewell who would have been incensed but when she and the girl happened to be out of the house together, she would say something and add the name Hulga to the end of it, and the big spectacled Joy-Hulga would scowl and redden as if her privacy had been intruded upon. She considered the name her personal affair. She had arrived at it first purely on the basis of its ugly sound and then the full genius of its fitness had struck her. She had a vision of the name working like the ugly sweating Vulcan who stayed in the furnace and to whom, presumably, the goddess had to come when called. She saw it as the name of her highest creative act.”

The joy of ugliness, the Hulganess of us all—that, maybe, is where O’Connor finally arrived.

But in 1946 and 1947, when she kept what has just been published as A Prayer Journal, O’Connor was a young woman from the humid South transplanted to the plains of the Midwest. Most journals are not meant to be read by others—which is what makes reading them such an illicit pleasure. Hers were recently discovered by a biographer, the Georgia State professor W. A. Sessions, while looking through her papers.

So here are her pithy prayers to a God who must have seemed terribly close when thunderclouds gathered above the plains:

“Dear God, I don’t want to have invented my faith to satisfy my weakness … My dear God, how stupid we people are until You give us something … Dear Lord, please make me want you … Can’t anyone teach me how to pray?”

Few entries are longer than a page; images of the original, in a Sterling notebook, are also here. The prayers are self-flagellating, unsparing. She wants God to burn clean through her, to make her new: “I do not know you God because I am in the way,” the 21-year-old writes. “Please help me push myself aside.”

O’Connor was not only a Catholic writer, but a Catholic writer who wrote Catholic books. Her world is always fallen—and since that world is the South, it has doubly fallen. But while she hovers ironically over her fictional characters, observing the hopeless errors of their ways, she is just as concerned with her own failings. In one entry, she castigates herself for “my lack of charity to Mr. Rothburg,” a student whose work she had not liked and who “came back at me today like a tornado.” Lamenting the episode, O’Connor concludes, “I am not much. Please help me to do Your Word oh Lord.”

Reviews of A Prayer Journal suggest that its main use is as an ancillary text to shed light on O’Connor’s fiction. I dissent. That relegates this lovely little book to a dissertation endnote. This is, rather, one of those personal works of passion that recall Saint Augustine asking God in his Confessions to “make me pure—but not yet.” Or it is Saint John of the Cross, the Spanish mystic, writing in his poem “Dark Night of the Soul”: “He wounded my neck/And caused all my senses to be suspended.” When O’Connor complains that “at present I am cheese,” I recall the great, shamefully neglected Catholic poet Gerard Manley Hopkins: “I am gall, I am heartburn.”

An admission is necessary here: O’Connor wanted things from God, just like today’s acolytes of the prosperity gospel, for whom religion is merely a means to material ends. It was that for her, too. “Please help me dear God to be a good writer and to get something else accepted.” The desire pervades A Prayer Journal—for Him to make her in His image, but also to make her a success. In return, she makes Him a promise: “I would like to write a beautiful prayer but I have nothing to do it from. There is a whole sensible world around me that I should be able to turn to Your praise; but I cannot do it.” She wants divine intervention to do whatever the workshop instructors at Iowa could not. Maybe all piety is nothing more than such exchanges intricately disguised, in which case televangelists have been right all along.

In “A Good Man Is Hard to Find,” probably her most widely read story, a family traveling by car to Florida gets into an accident. Their luck worsens when an escaped convict called The Misfit comes across the scene. Because the matriarch of the family recognizes him from news reports, he and his band have no choice but to execute the family. The grandmother pleads, to no avail, and her pleas of “Jesus!” only anger The Misfit.

“Jesus thrown everything off balance,” he reasons. “It was the same case with Him as with me except He hadn’t committed any crime and they could prove I had committed one because they had the papers on me.” Shortly after this, The Misfit shoots her thrice in the chest.

O’Connor had pleaded with God, in her Prayer Journal, desperate “to see the bareness and the misery of the places where You are not adored.” That much He granted her.