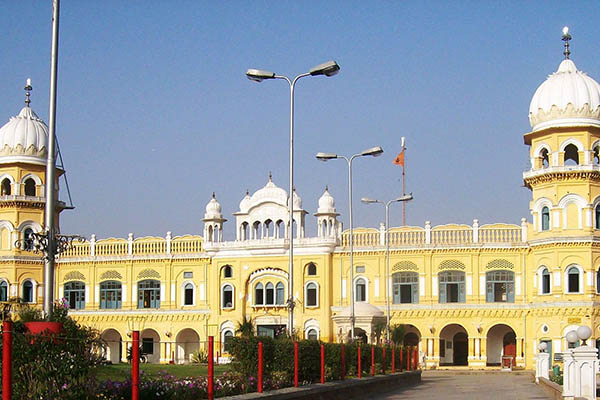 Members of the Sikh community from across the world converged on the Gurdwara Janam Asthan in Nankana Sahib on Tuesday to mark the 550th birth anniversary of Baba Guru Nanak, the founder of Sikhism.

Addressing a ceremony to mark the event, Interior Minister Brig (retd.) Ijaz Shah hailed the Kartarpur Corridor joining Pakistan and India as a “great gift” from the Pakistan Tehreek-e-Insaf-led government to the Sikh community. He said this initiative would pave the way for peace and friendship in the region.

Shah said Pakistan would continue to protect the holy sites of all its minorities, including the Sikh community, in the best manner possible.

The Kartarpur Corridor connects the Sikh shrine of Dera Baba Nanak Sahib in Indian Punjab with the Gurdwara Darbar Sahib in Pakistani Punjab. The 4.7-kilometer corridor will allow up to 5,000 daily visitors from India visa-free access to the shrine in neighboring Pakistan.

Similarly, Punjab Governor Chaudhry Muhammad Sarwar told the gathered crowd that the PTI government was committed to protecting the religious heritage of minorities across Pakistan. He said the Pakistani people had opened their hearts for the Kartarpur Corridor project.

Earlier on Tuesday, Punjab Chief Minister Usman Buzdar said the Kartarpur Corridor was a historic step by the PTI government toward promoting religious harmony in Pakistan. Congratulating the Sikh community on the 550th birth anniversary of Baba Guru Nanak in an official statement, he said the occasion was one of joy and religious fervor.

Buzdar said Baba Guru Nanak’s teachings were the best example of religious tolerance and inter-faith harmony, adding that the Sikh founder had promoted the message of brotherhood.

The chief minister of Pakistan’s most populous province said Sikhs were enjoying complete freedom to live according to their faith in Pakistan. The government was paying special attention to the maintenance, renovation and security of the Sikh community’s worship places, he added.