A Honeymoon Haven in Peril 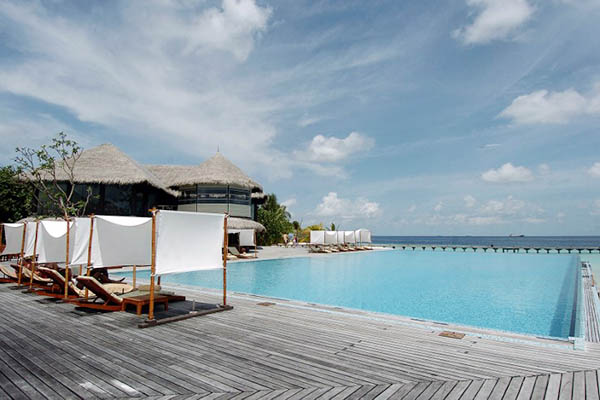 Famed as an upmarket tourist destination of white beaches and turquoise waters, the island nation of the Maldives is troubled by political turmoil and rising sea levels.

The country is a collection of 26 atolls made up of 1,192 tiny islands scattered 800 kilometers across the equator. Only 200 islands are inhabited with the country’s population put at 340,000 in the last census but estimated at around 417,000 in 2016 by the World Bank.

Its 298 square kilometers are home to about three percent of the world’s coral reefs. Tourism is the principal income earner, providing 41 percent of gross domestic product (GDP) in 2016 and nearly 20 percent of jobs, the World Travel and Tourism Council says.

The archipelago’s beauty drew around 1.28 million tourists in 2016, a four-percent rise over the previous year, according to U.N.’s World Tourism Organization data. It is a destination especially prized among honeymooners, such as Hollywood stars Tom Cruise and Katie Holmes who visited in 2006.

Maumoon Abdul Gayoom ruled with an iron fist for 30 years until 2008, when he lost the first multi-party polls to human rights activist Mohamed Nasheed. Nasheed was forced to resign in 2012 after a police mutiny and demonstrations that he said were part of a coup plot.

In disputed elections the following year, he was defeated by Gayoom’s half brother, Abdulla Yameen, the current president.

In 2015 Nasheed was sentenced to 13 years in jail on a terrorism charge widely criticized as politically motivated. In 2016 he was granted prison leave for medical treatment in London, where he secured political asylum with the help of high-profile human rights lawyer Amal Clooney.

While Nasheed continues to push for change from exile, Yameen declared a state of emergency on Feb. 6 after judges ordered the release of his opponents.

Eighty percent of the Maldives is less than a meter above sea level, making it one of the countries most threatened by rising sea levels linked to climate warming.

In 2009 Nasheed held a cabinet meeting underwater to raise awareness of the risk, also warning his people could become climate refugees.

Situated along Indian Ocean trading routes and about 650 kilometers southwest of Sri Lanka, the Maldives has been colonized several times. Once a Buddhist kingdom, it converted to Islam around the 12th century.

Portuguese explorers occupied the main island of Mahe in the 16th century. The territory then became protectorates of the Dutch and the British before complete independence on 1965. Sunni Islam today remains the state religion, all other religions being banned.

The Maldives follows a moderate version of Islam while banning alcohol, except in tourist hotels, and homosexuality. It also flogs women found guilty of “fornication,” says Amnesty International, which is critical of the human rights situation that it says includes restrictions on peaceful protests and expression.

The Maldives left the Commonwealth in 2016 in a row over criticism of its rights record. There are fears of radicalization with the arrival of Middle East preachers and via radical websites.

Nearly 60 Maldivians are known to have traveled to Syria and Iraq to fight with foreign jihadists, and some are believed to have returned. In travel advice issued this year, the United States urged increased caution due to the possibility of a terror attack.