A Library for Bin Laden 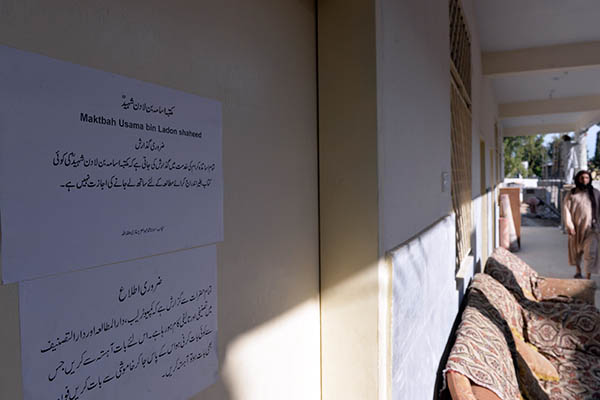 A member of Islamabad’s Jamia Hafsa madrassa has claimed its library was renamed because the slain Al Qaeda chief is a ‘hero of Islam.’

A women’s madrassa in Islamabad has renamed its library in honor of slain Al Qaeda leader Osama bin Laden.

The madrassa is run by controversial hardline cleric Maulana Abdul Aziz, the imam of the city’s Lal Masjid, once notorious as a hideout for hardliners with alleged militant links. The mosque was the scene of a weeklong military siege against radicals in 2007, which left more than 100 people dead and unleashed a wave of Islamist attacks across Pakistan.

Now the Jamia Hafsa madrassa connected to it has named its small library, stocking Islamic texts, in honor of bin Laden, who masterminded the 9/11 attacks in the United States. “It is true that we have named the library after Osama bin Laden,” a source told AFP on Thursday, speaking on condition of anonymity. “He might be a terrorist for others but we do not consider him as a terrorist. For us he was a hero of Islam.”

A small printed sign stuck over the library door gives bin Laden’s name and refers to him as a “martyr.”

Bin Laden was killed in a U.S. Special Forces raid in Abbottabad in 2011 and for some radicals in the country he is a heroic figure. On the first anniversary of his death, hundreds of people took to the streets to pay tribute to him.

The Lal Masjid raid was one of the triggers for the Pakistani Taliban’s bloody insurgency, which has claimed more than 6,800 lives in the past seven years, according to an AFP tally.