Home Lightbox A Life of Turbulence

A Life of Turbulence 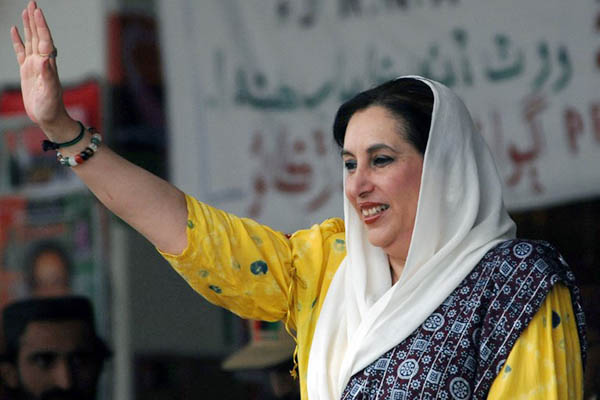 The first female prime minister of a Muslim nation, Pakistan’s slain opposition leader Benazir Bhutto was an aristocrat embraced by the poor who said her own life mirrored Pakistan’s “turbulence, its tragedies and its triumphs.”

Hailed by the West as a moderate in the world’s only Islamic nuclear power, Bhutto was a shrewd but divisive figure at home where she was mired in corruption allegations and despised by religious extremists. “I didn’t choose this life, it chose me,” she wrote in her 1988 memoir, Daughter of the East

The 54-year-old graduate of Oxford and Harvard was killed on Dec. 27, 2007, little more than two months after returning from exile as she campaigned to return to power. The most definitive accounts of Bhutto’s death show an assassin shot her in the neck and then blew himself up, killing 24 people.

She was laid to rest beside her father, former premier Zulfikar Ali Bhutto, who was hanged in 1979 on the orders of military dictator Zia-ul-Haq, propelling his daughter to carry on his legacy. Nearly 10 years later, showers of fresh rose petals over the grave show how deeply she is still mourned in her family’s power base in Sindh province—revered almost as a saint rather than a politician.

Hundreds of devotees visit daily—thousands on her birthday and death anniversary—lighting incense and reciting the Quran inside the white-marbled family shrine reminiscent of India’s Taj Mahal.

Benazir Bhutto was born in 1953—six years after Pakistan was created as a Muslim homeland out of British-ruled India—the eldest of four children in a powerful family dynasty in Sindh. Like her father, Benazir’s gaze was turned to the West from an early age, although she nonetheless accepted an arranged marriage to businessman Asif Ali Zardari, with whom she had three children.

Bhutto headed to Britain after Zia deposed her father. From exile, she maintained a firm grip on the Pakistan Peoples Party (PPP), sometimes to the resentment of allies who believed she ran it as a family fiefdom. Despite her affection for London’s posh Harrods department store, Bhutto returned to Pakistan to run as a populist, rallying through the countryside with her trademark loose white veil.

After Zia died in a mysterious plane crash in 1988, Bhutto—at the age of just 35—became the first female prime minister of an Islamic country. But observers said that, without full control over the civil and military establishments, she was never able to govern properly.

She was elected twice and both times thrown out of office on corruption allegations. Bhutto and her husband also faced a raft of corruption charges overseas, which they denied.

On Saturday, just days before the first verdicts in the trial of his wife’s murder were announced, an accountability court found Zardari innocent of a corruption case filed against him in 1998.

Bhutto went back into exile in 1999 when military leader Pervez Musharraf took over in a bloodless coup. She again shrewdly worked her contacts in the West, casting herself as the force who could save Pakistan from Islamic militancy.

Her heralded return in 2007 was quickly marred by a suicide attack that killed 139 people. Musharraf declared a state of emergency, prompting international criticism and a backlash within Pakistan. Before she was killed, Bhutto was hoping for a third term in power in 2008 elections.

Musharraf’s government blamed her assassination on then-Pakistani Taliban chief Baitullah Mehsud, who denied any involvement. He was killed in a U.S. drone attack in 2009. In 2010, a U.N. report accused Musharraf’s government of failing to give Bhutto adequate protection and said her death could have been prevented.

Musharraf was charged with her murder in 2013, adding to the indictments of two police officers and five alleged Taliban militants.

On Thursday, an anti-terrorism court declared him a fugitive in the case. It also found the two officers guilty of security breaches, sentencing them to 17 years imprisonment each in the first verdicts since the assassination almost a decade ago. But it turned the five alleged militants free, nearly 10 years after they were first arrested.

Bhutto’s son Bilawal, currently the leader of the PPP, hopes to follow in his mother’s political footsteps in elections due to be held by the end of 2018, though the party’s power has largely faded outside Sindh since her death.

I admire Benazirr Bhutto and love ,respect and rehber as pakistan’s first female elected prime minister but her killers are free and enjoying best life in dubai or elsewhere