Home Culture A Meal to Remember

A Meal to Remember 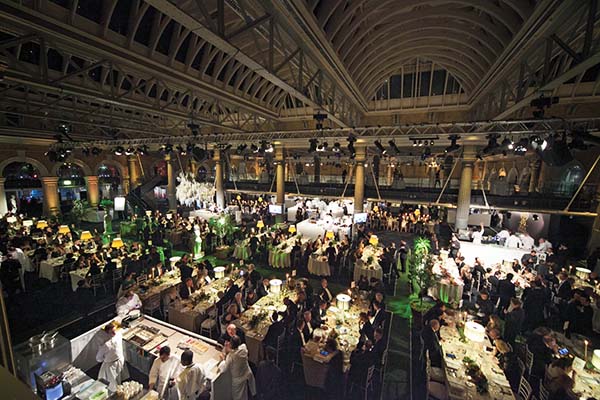 [dropcap]W[/dropcap]hen the international hospitality association Relais et Châteaux began nearly 60 years ago, it represented just eight of the best hotels and restaurants between Paris and Nice. At the time, that route and those restaurants were the pinnacle of culinary excellence on the planet. No longer. Today there are more than 500 Relais members scattered throughout the world, and a high proportion of their restaurants are not even French-inspired.

Now even Britain has emerged after centuries in the gastronomic doldrums. And to mark that ascent, Relais chose London to host its third annual culinary road show, after Versailles and New York. It is not just the technical wizardry of chef Heston Blumenthal in his stellar restaurant The Fat Duck that has put Britain on the food map. It is the unrivaled Indian, Lebanese, Italian, Scandinavian, and, yes, even British restaurants that give London its current culinary buzz.

Billed as the “dîner des grand chefs,” the Relais event convened 46 of the most renowned international chefs at Old Billingsgate, once the world’s biggest fish market, for a one-off celebration for 600 guests paying nearly $1,000 a head. With a price like that, it had to be a charity event, and many tens of thousands of dollars were raised for malnourished children. The other purpose was to raise awareness of the exceptional quality of British ingredients: great lobsters and crabs from the south coast of England, chickens from Wales and Aberdeen, Angus beef from Scotland. Raymond Blanc, a high-profile French chef who has run the superlative Le Manoir aux Quat’ Saisons near Oxford for more than 30 years, staged an impromptu farmers’ market for the visiting chefs. The wild smoked salmon and rare-breed beef from the Ork­neys seemed to satisfy the most skeptical of them, though I doubt if many will be seeking the recipe for haggis, that challenging marriage of sheep innards and oatmeal.

But what of the actual meal itself? In fact, there wasn’t one, but 15. Chefs cooked in pods of three for specific tables, each trio given roughly the same ingredients but set free to place their own twist on the dishes. So if you were seated with Hélène Darroze’s group, you would have her tandoori spiced blue lobster as one course, later followed by biltong (cured beef fillet) served with wild greens, sorghum, and African sour fig by South Africa’s Margot Janse. Patrick O’Connell, the chef proprietor of Virginia’s acclaimed Inn at Little Washington, surprised his table with a “tin of sin,” which appeared to be a small pot of caviar, but was in reality Californian-sourced osetra caviar covering a cucumber jelly over layers of British white and brown crab. At Raymond Blanc’s table, he preferred to create a Devonshire crab and celery salad with pink grapefruit.

Chefs lead quite isolated lives, with most of their waking hours spent in their kitchens, so it is a particular pleasure for them to work with other chefs from around the globe. “I have cooked at all three Relais events. You develop bonds with other chefs that couldn’t happen just socially. When you work together, you know each other in a very different way. The camaraderie just grows,” remarked Patrick O’Connell. “The other great thing is that we all have some of our favorite clients who have flown in just to be here. Several of mine are here from Washington, D.C.”

For all the artistry and great ingredients on hand, it would be hard to make a case that these ad hoc dishes matched any meal created by the individual chefs in their own kitchens. How could they? The chefs had only arrived at their stations a few hours before the event, so they were cooking in a completely alien environment with ingredients they were not necessarily familiar with and, most important, for a huge number of customers simultaneously. In some ways, it is like comparing a studio recording of, say, a Beethoven piano sonata with Miles Davis on trumpet in a crowded nightclub. Still, there were no complaints among the guests, who were greeted at the entrance by the towering Shard building on the opposite bank of the Thames, while Tower Bridge was specially illuminated downriver.

London is becoming slightly blasé about hosting international culinary events: the next big thing is the San Pellegrino top 50 restaurant awards at the end of the month, with even more famous chefs in one place. There, however, they will not be cooking, but just relaxing and basking in the newfound glory now given people who until recently were merely anonymous toilers in the kitchen. As Raymond Blanc told the Relais guests, “If you wanted to train to be a chef in the old days, it probably meant you were a dropout, social outcast, or in need of a frontal lobotomy.” Now such recruits are at the cutting edge of one of the coolest professions around.

Food writer Palling blogs at www.gastroenophile.com. From our May 10, 2013, issue; A Meal to Remember.