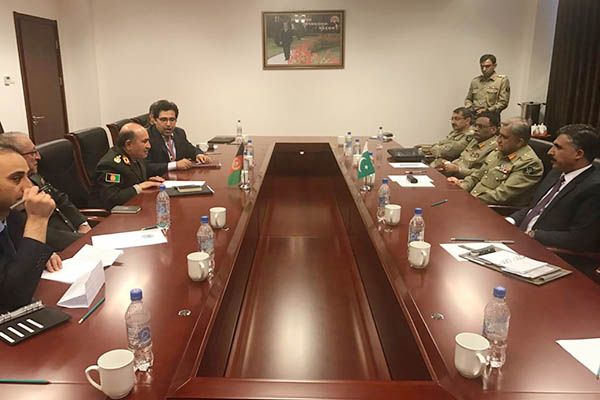 Can the region’s major nations unite against a common enemy?

Speaking at the newly formed Quadrilateral Counter-Terrorism Coordination Mechanism (QCCM) forum in Dushanbe, Pakistan Army chief General Qamar Javed Bajwa delivered a moderate message to his counterparts from China, Tajikistan and Afghanistan. He said Pakistan had cleared its territory of terrorists and needed cooperation from its neighbors to usher in peace in the region. He said the plaint that Pakistan’s border was open to infiltration into Afghanistan should be seen in perspective: Pakistan was busy establishing border posts for vigilance against terrorism while Afghanistan, the “victim state,” was absent from the border. He countered the allegation of Pakistan’s involvement inside Afghanistan by saying that Kabul must think of taking back 1.3 million Afghan refugees—a large number of them born in Pakistan—to make sure it is safe against terrorism.

It was telling that General Bajwa was speaking in Tajikistan, once greatly troubled by “cross-border” terrorism from Pakistan. The Pakistan-based Islamic Movement of Uzbekistan, under Tahir Yuldashev, led a 5,000-strong force of Uzbek youths and made trouble in China, Tajikistan and Afghanistan from its stronghold in North Waziristan. He “rewarded” Pakistan for this by joining Mullah Fazlullah in Swat in 2007, triggering Operation Rah-e-Haq by the Pakistan Army. That operation resulted in Fazlullah fleeing to Afghanistan and ramping up the Pakitani Taliban’s attacks in Pakistan—much as the Afghan Taliban are doing to Afghanistan now. At the high-water mark of the Afghan war, China too was threatened by warriors training in the safe havens of Pakistan till Islamabad woke up to the threat.

Unfortunately, U.S. President Trump’s outburst against Pakistan, and invitation to India to increase its stake in Afghanistan, invites a return to the early days of war against the Soviet Union when everybody including Pakistan made mistakes. It is easy to imagine that Pakistan might react to Indian presence in Afghanistan by changing its stance vis-à-vis the Afghan Taliban. But as India increases its role in Afghanistan, it will have to rely on Iran for logistics, encouraging terrorism on Iranian soil. The United States should heed the moderate call made in Dushanbe by General Bajwa to cooperate against a common enemy instead of planning a wider conflict in the region.