What’s the big deal about gifting babies to the childless?

Aamir Liaquat Husain of Aalim Online fame has recently made waves in the media by giving away a baby to audience members as part of his Ramzan transmission on Geo TV. For some reason, this has caused much consternation in the ranks of the liberal fascists. I’m not really sure why. Frankly, I think he’s on to a good thing.

Let’s begin with an obvious point: Husain is a man of unimpeachable onscreen holiness, and as such anything he does on television is beyond the ambit of moral condemnation. This is a man who—at least in the Islamic holy month of Ramzan—spends eight hours a day, every day, bringing joy to the masses. And yes, I do mean masses. As proudly announced by The News, Husain’s Ramzan transmission has broken all previous records. Since Husain is the most popular television host on Pakistan’s most popular television channel, whatever he is doing obviously has popular support. And as we all know, the Ummah can never unite in error. Besides, how can you doubt the conduct of someone so holy that he prefers to wear a thobe, the floor-length maxi-kurta preferred by the holy people of Saudi Arabia?

Let’s leave aside minor issues such as Husain’s dress sense and focus instead on his genius. As we all know, Pakistan has two major problems: one is a surplus of babies and the second is a shortage of foreign exchange. What the learned Aalim has shown us is how to fix both problems in one go. 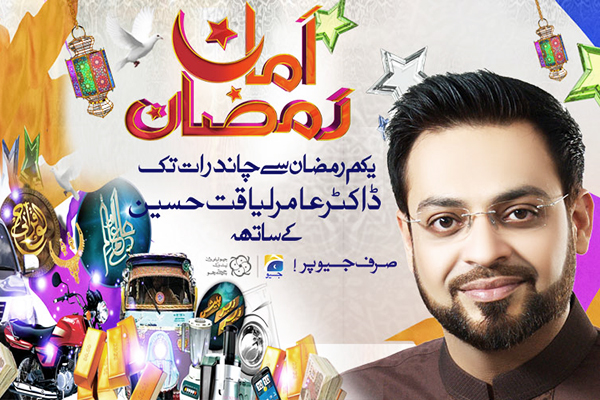 Let’s be honest, poor orphans growing up in Pakistan really have no chance of a decent life. The education system doesn’t work, health care is a mess, and large parts of the country have no functioning law and order system. Forcing them to grow up in Pakistan will only compound their misery.

At the same time, it is also a fact that many of the Western countries are suffering from a population crisis of a different sort caused by the regrettable tendency of their child-bearing women to not produce children. From Singapore to Japan, Italy to Germany, countries are now facing a grayer future in which the population will grow steadily older.

My proposal then is to sell our children to childless couples in the West. More specifically, the Government of Pakistan should establish a child exchange in which Pakistanis can place their children for adoption by the highest bidder. There should be standardized sorting and grading of all babies (color, weight, parentage) so that bidders know what they are getting and the exchange should in turn ensure that minimum market standards are followed (e.g., basic vaccinations).

Given that this proposal respects the basic elements of the Washington Consensus (free markets, freedom of contract and private enterprise) I am sure the multilateral development banks will be only too happy to help out. And in time, we will develop a specialized class of Pakistanis whose only job will be to produce children for export. It should also be noted that Pakistani law has a clever way around what would normally be a production bottleneck. Normally, one couple can only produce one child for export every year or so. However, since Pakistani men can have as many as four wives, this means that production of babies can be undertaken on a continuous basis.

Our Islamic scholars may also wish to see if it is possible to revive the ancient practice of concubinage as that would certainly allow production to boom. So far as I understand, concubines could only be taken from the Dar-ul-Harb. However, Pakistan is fortunately located next to India, a country of more than a billion people, which certainly qualifies as being “Dar-ul-Harb.” Pakistan already has a well-established practice of sending raiding parties into India. The raiders should now be directed to bring back slave women so as to help Pakistan reduce its foreign exchange problems.

One point which has been raised is whether it would be appropriate to send Muslim children to be raised in the atheist culture of the West. Once again, the answer is to look at this problem as an opportunity. The answer is to require baby purchasers to bring up their purchases as Muslims. This way, not only would Pakistan earn valuable foreign exchange but we would also be helping to convert the heathen people of the West.

Aamir Liaquat Husain is being wrongly criticized. The man is a genius.

So you want to sell MUSLIM babies to NONMUSLIMs.. SO they too become NONMUSLIMS.. Idiot without a brain

what a chawal article u wrote, started well from Amir liaqat and progressed on to a baby exchange? Dafuq bro?

We are great people…. We want the best learned person to teach modern education to our children, and feel proud to praise such a non-linked person to lead us towards Jannah…..

I see the sarcasm was lots on most people. Here’s what the article was fashioned after, its satire people. http://art-bin.com/art/omodest.html

Hi People of Pakistan. There’s a little something called satire. Granted the PTA will probably be blocking it soon, but seriously, Google that shit.

@FEISAL: the comments bro .. i loled. Imagine what kind of people are reading your articles. Stop wasting your time 😛

AAMIR is highly controversial as far as minorities are concerned, as he has been promoting the narrowest possible views.

And here I thought the title would be an easy give away….but I guess somethings like satire are beyond reach.

Oh Anaya you take the fun out of the comments section, come on!!

get a life man instead of writing this type of shit…pathetic!

Another Illiterate and non human being written the article with his foolish and hilarious thoughts. Deserves to be beaten on Choraha.

This article is really written from the BAR, no doubt about it. If someone has to check the hight of nonsense, must read this.

Faisal Naqwi seems to be a very educated fellow. His satire very well explains Amir Liaqat’s heinous act. He means to say that the only way to justify Amir Liaqat would be if one start thinking in such a materialistic and insensitive manner. He has done a brilliant parody of Jonathan’s Swift “A Modest Proposal”.

This tongue in cheek satire never helps anyone…..
Plus I just dont think this line has any justification, and I dont think its a parody:
“Pakistan already has a well-established practice of sending raiding parties into India”.
Thats just an irresponsible statement, nothing more nothing less.

“So you want to sell MUSLIM babies to NONMUSLIMs.. SO they too become NONMUSLIMS.. Idiot without a brain”………face palm