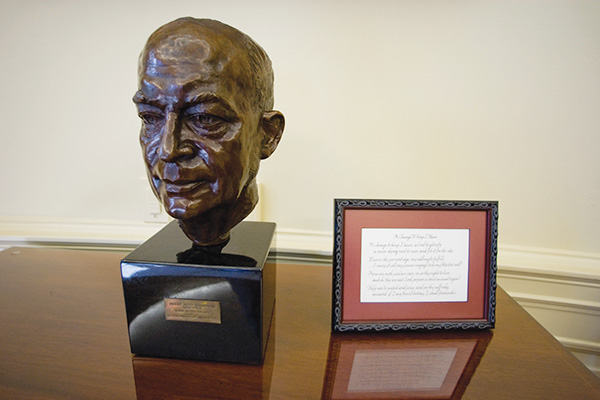 A new chapter in the Eisenhower family’s battle with Frank Gehry.

How best to remember the 34th president of the United States? The Eisenhower family wants a green open space on the National Mall with a simple statue in the middle, while the Eisenhower Memorial Commission wants an ambitious design conceived by famed architect Frank Gehry. On June 19, the commission voted to push ahead with its preferred plan, marking the latest chapter in a longstanding spat between the two sides—one that raises intriguing questions about what, exactly, makes for a successful presidential memorial.

The two camps have been at odds for years. The family’s preference for a plain design was sidelined with the choice of Gehry, whose creations are anything but simple. Gehry’s original design featured a white fiberglass statue of Dwight Eisenhower as a barefoot boy, which granddaughter Susan Eisenhower told a House subcommittee last year was the wrong focus. “The Eisenhower our nation wants to celebrate is not a dreamy boy but a real man who faced unthinkable choices, took personal responsibility, and did his duty with modesty and humility,” she argued.

To accommodate the family, Gehry added statues of Eisenhower as military commander and president, but insisted on keeping the boy, a figure that children can relate to when they view the memorial by the National Air and Space Museum. And Gehry refused to change anything about the 80-foot-tall woven metal tapestries that serve as a backdrop to the statues and feature scenes from Ike’s boyhood in Kansas. Susan told lawmakers that the tapestries remind her of the billboards “Granddad told us he hated” and that they are costly and hard to maintain. In a letter to the commission last year, Eisenhower’s sole surviving child, John Eisenhower, argued that the design, though creative, was “too extravagant” and “tries to tell multiple stories. In my opinion, that is best left to museums.”

The family certainly has a point about the scale and cost of the monument being out of kilter with Eisenhower’s humble approach to the presidency. And I sympathize with the admirable virtues embodied in their vision.

On the other hand, all great monuments need to reach beyond the stone and tell a bigger story. Gehry has acknowledged the tension between the two ways of understanding Eisenhower, saying, “These two perspectives are often at odds—one modest, the other monumental.” In the end, given a contest between a modest design that could fade with time and a grand one that would have a greater impact on future generations, I tend to think the commission made the right choice.

Hanging Out With Hezbollah