Home Lightbox A Most Dangerous Man

A Most Dangerous Man 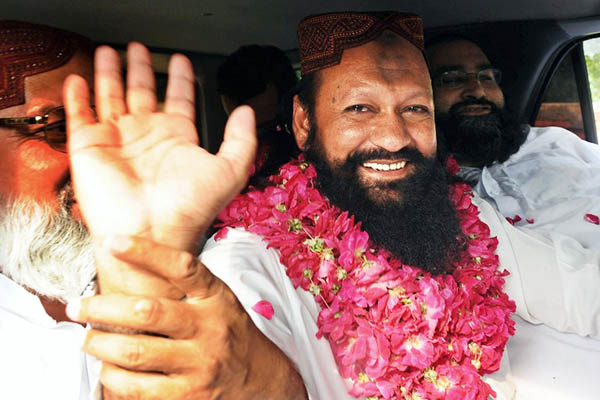 The release of Malik Ishaq, a highly-connected terrorist, speaks well for no one.

The Supreme Court of Pakistan on July 15 released on bail Malik Ishaq, leader and founder of Al Qaeda-linked Lashkar-e-Jhangvi, on grounds of “lack of evidence.” The man had been facing a number of cases at the antiterrorism court in Lahore charging him with hundreds of murders. He remained in jail for 14 years while evidence against him gradually decayed and disappeared—a pattern traced by terrorists in custody, none of whom has so far been punished in a country crawling with terrorist organizations.

On his release, he was received outside Kot Lakhpat prison by leaders of Sipah-e-Sahaba Pakistan, banned in 2001 as a terrorist organization but now—after being renamed harmlessly to Ahle Sunnat wal Jamaat—resting in a legal grey area because of an appeal lying with the higher judiciary. The Sahaba leader heading the welcome party was Maulana Muhammad Ahmad Ludhianvi—recalling an anti-Shia 1980s polemicist who was assassinated in Karachi—who came in handy when the current Army chief, Gen. Ashfaq Kayani, called on Ishaq to talk to the terrorists who had attacked Army General Headquarters in Rawalpindi in 2009. The Army chief’s personal plane had carried Ishaq to Rawalpindi, while another plane belonging to the ISI chief, Gen. Shuja Pasha, carried Ludhianvi.

Sipah-e-Sahaba’s welcome party was hardly a dozen strong, but by the time it reached the border of South Punjab, the numbers began to swell. If in Okara it was a few hundred, and a thousand in Khanewal, it was nearly 5,000 in Bahawalpur—the city of Lashkar-e-Jhangvi’s sister terrorist organization, Jaish-e-Muhammad. When Ishaq arrived in his village of Tarinda Sawai Khan in Rahim Yar Khan, the crowd out to greet him was actually 15,000-strong, as claimed by a Sahaba publication.

Their newspaper, Daily Ummat Karachi, in its July 16 edition said Ishaq had been freed without any “secret deal” and that he had rededicated himself to war against the proliferation of “insulters” of the Companions of the Prophet (peace be upon him) on the Internet as he now fought under the flag of Sipah-e-Sahaba after disbanding Lashkar-e-Jhangvi. How far Jhangvi will be disbanded after appearing on the flag of Al Qaeda’s 313 Brigade (which includes Jandullah and Tehrik-e-Taliban Pakistan) is yet to be seen. One reason Ishaq has joined Sahaba is that the banning order against it is on hold and this takes him away from the mischief of the antiterrorism law.

According to the publication, Ishaq was wanted in 43 cases, involving 70 murders, out of which he had been acquitted in 37 and awarded bail in eight. The last case, involving planning—from prison—the attack on the Sri Lankan cricket team in Lahore in 2009 has concluded in another bail at the Supreme Court after which he has been released. Earlier resistance to release by the Punjab government had required Lahore to pay for the monthly sustenance of Ishaq’s family. This time Lahore let him go. Daily Ummat says that, because Punjab was not releasing Ishaq, Sipah-e-Sahaba decided to reach an agreement with Punjab Chief Minister Shahbaz Sharif on electoral support in Bhakkar from where the latter was elected unopposed with the help of Ishaq’s brother.

Arriving back in South Punjab, Ishaq has consolidated the power of the hard-line sectarian organizations emanating from the state policy of jihad. He is ranked at par with the chief of Jaish-e-Muhammad, Maulana Masud Azhar, famous for his companionship with Osama bin Laden and his linkage with Omar Sheikh, who contributed to the killing of The Wall Street Journal reporter Daniel Pearl in Karachi in 2002. Sheikh, too, has been charged with planning terrorist acts—including against then President Pervez Musharraf—from his prison cell in Sindh. Azhar and Sheikh were both sprung from an Indian jail in 1999 and released in Kandahar, after the hijacking of an Indian airliner in Nepal, as a result of a deal facilitated by a Pakistan-dominated Taliban government in Afghanistan.

Ishaq headed a union of shopkeepers in Rahim Yar Khan when he fell under the thrall of Maulana Haq Nawaz Jhangvi, the founder of the Shia-apostatizing Sipah-e-Sahaba in 1982 after his contacts with Arab princes enjoying extraterritorial hunting rights in Rahim Yar Khan made him strong. Against the background of an Arab-Iranian confrontation in the region, Sahaba flourished financially, too. The other devotees of Maulana Jhangvi were Jaish-e-Muhammad’s Azhar and Riaz Basra, who was killed in a “police encounter” in 2002 because “no judge could sentence him.” Basra and Ishaq founded Laskhar-e-Jhangvi.

After Ishaq was arrested in 1997 in the wake of the killing of five Iranian Air Force trainees in Rawalpindi, Basra threatened the government with dire consequences unless he was released. Meanwhile, another Lashkar-e-Jhangvi commander, Akram Lahori, went on killing Shias in Karachi, which according to Ishaq was much easier because the Jhangvi cadre there was better trained than in the Punjab. (Training was received in Al Qaeda camps in Surobi, Afghanistan.) Facing trial in Multan, Lahori, responsible for the killing of such well-known Karachi figures as businessman Shaukat Mirza and prominent Shia doctors, was indicted in 2010 after living comfortably in jail for seven years. Witnesses against him in Multan continue to die or disappear. Witnesses against Ishaq also have a hard time surviving, as in the case brought against him by a Shia citizen, Fida Husain Ghalvi, charging that Ishaq had killed 10 of his family.

The Punjab government has made a deal with Sipah-e-Sahaba after seeing its growing clout in South Punjab. One well-known episode was recorded by jihadist newspaper Islam: “Punjab Law Minister Rana Sanaullah visited Jhang and paid his respects at the tomb of the founder of the greatest banned sectarian-terrorist Deobandi organization, Sipah-e-Sahaba, Maulana Haq Nawaz Jhangvi. He led a delegation of the [Pakistan Muslim League (Nawaz)] which also included parliamentary secretary Iftikhar Baloch and party M.P.A. from Jhang, Sheikh Yaqub. He also visited the tombs of other Sipah-e-Sahaba martyr-leaders like Maulana Isarul Qasimi and Allama Azam Tariq.”

Threatened communities have reacted predictably. Shia outfit Imamia Students Organization issued the following statement: “The planned release of terror kingpin Malik Ishaq who is also the co-founder of banned organization Lashkar-e-Jhangvi, with the blessing of Punjab government’s weak prosecution and the court’s blind decision is likely to fuel the ruthless killings of Shias across the country.” Sri Lanka, which hoped to get justice for the attack on its cricket team, and Iran, whose cultural consul Muhammad Ali Rahimi was allegedly killed by Ishaq in Multan in 1997, will also be offended. His release was badly timed. President Asif Ali Zardari’s paid a goodwill visit to Iran the same week.

When the Iranian consul in Lahore Sadeq Ganji was assassinated in 1990, the strong presence of Sipah-e-Sahaba in politics prevented the due process of law to unfold. At the Lahore High Court, where the killers faced trial, many judges retired or were elevated before the court was able to pass the obvious death sentence. Sahaba wanted to pay diyat or blood money for the killer it wanted spared, and even approached Iran in this respect. The power of apostatizing sectarian elements has redoubled in 2011 and “legal” political parties have to align with them to survive in certain regions. All it takes is a renaming of the banned organization.