Home Latest News A Movement of Many Shades

A Movement of Many Shades 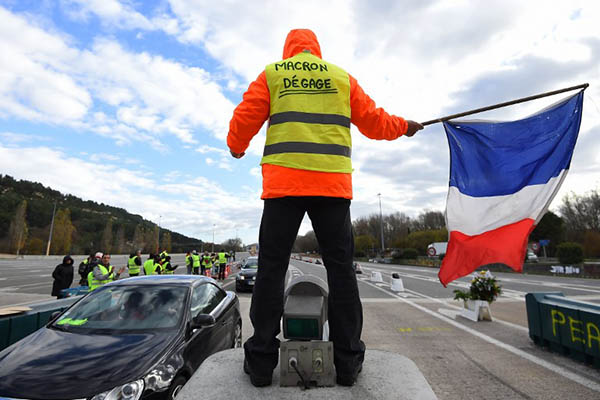 France’s ‘yellow vest’ protesters have varying agendas, all united in their anger against President Macron

France’s “yellow vest” protesters are all angry at President Emmanuel Macron, but their different goals and grievances show how diverse the movement has become. Protesters turning out across France on Saturday highlighted demands ranging from better support for pensioners to the downfall of capitalism.

Unemployed waiter Tim Viteau, 29, and his girlfriend are both planning to move back in with their parents because they cannot meet the rent. “It’s as if we’re 16 years old,” said Viteau, who hitched a lift from the eastern city of Lyon for his third Parisian demonstration in as many weeks. “I’m on benefits, the biggest business in France,” he joked.

Striking up conversation with a couple of fellow twentysomethings, he asked them: “How do you manage to have children? I also want to have children but I cannot plan beyond the next four months.”

Sylvia Paloma was among around 2,000 protesters marching through the southern port city of Marseille. Like many pensioners who have joined the movement, the 70-year-old is angry at Macron’s government for squeezing her allowances. “To get to our age and have to beg, it’s mad,” the former civil servant said. With a traditional French revolutionary cap upon her head, she had the words “Macron, resign, don’t be dumb” emblazoned on the back of her luminous vest. “This is the first time I’ve ever protested,” Paloma said. I get a pension of 1,248 euros a month, my four children have to help me out.”

Hubert Bertrand, 53, runs a small construction company—and says the tax and social security bills in France, among the highest in Europe, leave him unable to give his staff a pay rise. “Our leaders are completely detached from reality,” he said at the Marseille protest. “We should have entrepreneurs, shopkeepers and artisans running the country.” He has abstained in recent elections, or else ruined his ballot.

“Misery is seeping out of Paris,” sang anti-capitalist activist Alice, who declined to give her last name, accompanied by a “citizen” brass band near the capital’s opera house. “This isn’t a government problem, it’s a problem with a political system which is capitalist and liberal,” the 31-year-old said. Her group was marching with a black and red anarchist flag and a banner that read: “Social justice or total war.”

Alice, who is from Aveyron in southern France and works as a summer camp coordinator, is not bothered by the fact that the “yellow vest” movement spans from the far-left to the far-right. “We don’t care if you’re left or right,” she said. “The question is how to build a political movement for all citizens out of this. We need unions to call a general strike.”

Lydie Bailly, 48-year-old health worker from the central town of Vierzon, is among many “yellow vests” who thinks Macron understands little of the lives of ordinary people. “We haven’t had a pay rise in 10 years, it’s just disgusting. We’re not even scraping by, it’s just not possible anymore,” she said.

It isn’t just Macron’s former life as an investment banker that grates on protesters, or a string of comments he’s made which have been deemed dismissive of the working classes. Many protesters cite an order for a new set of china for the Elysee Palace for a reported 500,000 euros as evidence of his personal extravagance.

Bailly wants a leader more like Germany’s Angela Merkel, who lives in an ordinary apartment in Berlin. “She takes the train and regular planes, not private jets,” Bailly said.

Thomas Lefeuvre, a 24-year-old in Marseille, represents a small sub-section of the “yellow vest” movement who would like to see France do away with parliamentary democracy altogether. A gardener by trade, Lefeuvre was protesting with a bunch of flowers in his hands “in homage to the peaceful warriors in Paris today.”

“We want citizens’ referenda,” said the father-of-one, who like many other “yellow vests” says he struggles to make ends meet on his salary of 1,300 euros a month. “With the internet, we don’t need members of parliament anymore. We can vote for everything by referendum,” he said.