Home Lightbox A Murder of the Mind

A Murder of the Mind 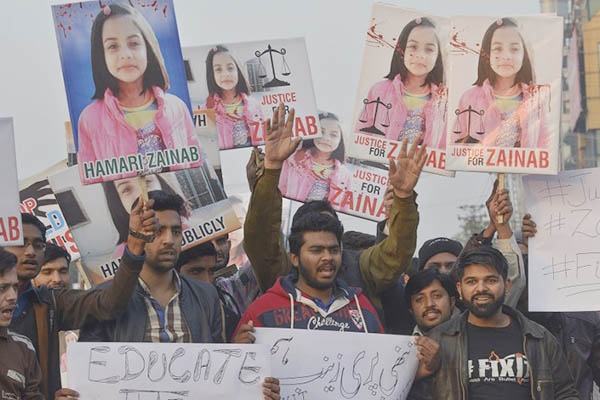 The raped body of 7-year-old Zainab, found dumped in a rubbish heap in Kasur on Jan. 11, has had a traumatic effect on Pakistan. There are a number of aspects to this trauma that must be analyzed before a cure is put together.

The first devastating effect is despair. The details of the rape-murder tend to switch off the normal problem-solving capacity of the collective mind. There is an upsurge of anger, which promises a radical and conclusive “solution” under the current conditions of justice. Because of the “unfamiliar” details of the crime, what dominates is not so much anger as despair, which is not a good collective feeling for problem-solving.

Passive despair triggers another reaction: self-hatred. At the collective level it means a serious blow to the normal levels of self-approval keeping the collective identity intact to get rid of the problem. Self-hatred also tends to isolate the individual and alienate him from the socio-political conditions he lives under. It also constitutes a break with the democratic political order leading to submission to a non-democratic one.

The flawed administration of the state that allowed the tragedy of little Zainab to unfold triggers the rage for change, as if the pulling down of the government would lead to radical overnight improvement. Political parties, sensing the collective mood, propose violent solutions and are able to get the support of the gravely offended citizen. This is the phase where the despairing and self-hating citizen succumbs to violence.

In Kasur, powerful men and their families have adopted abnormal ways of expressing their dominance. The ruling party makes concessions to them because of their support to its leaders. The outraged citizen in his despair supports the pulling down of the government with violent politics. The state is thus destabilized, leading to a further undermining of its capacity to apply solutions to prevent children from being violated with impunity.