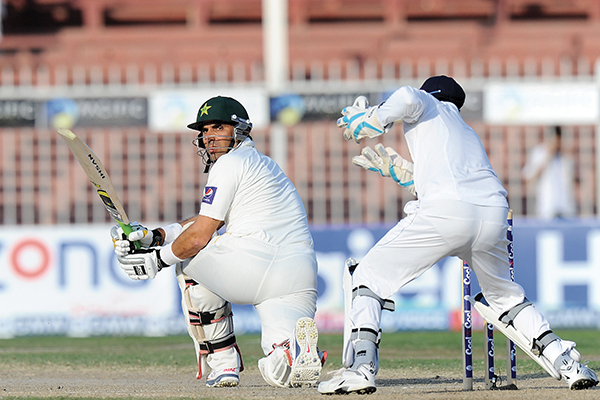 Pakistan set a new cricketing record by scoring the fastest 302 runs in Test history on Jan. 20. This was the third and final match against Sri Lanka at Sharjah. With a run-rate of 5.25 per over, Pakistan surpassed the 1984 Test record of 5.19 runs per over set by the West Indies. The win has helped vault Pakistan captain Misbah-ul-Haq to international glory. Writing for The Telegraph, cricket novelist Richard Heller and Peter Oborne called Haq “the most honorable cricketer of the modern era” and credited him for the “improbable and famous” and “imaginative and inspirational” win over Sri Lanka. The authors said Haq has had the “toughest task” of any Pakistan captain, having had to “cope with infighting, selectorial caprice, and the notoriously chaotic administration of Pakistan cricket” as well as having to boost the morale of a side “tainted and demoralized” by the 2010 spot-fixing scandal and being forced to play home matches abroad. Haq’s wins ratio has put him ahead of another Pakistani cricketing legend, Imran Khan. But the authors wonder how the business-school graduate “can continue to sustain the performance and mentality of his players.”