A Primer on Tehreek-e-Labaik Pakistan 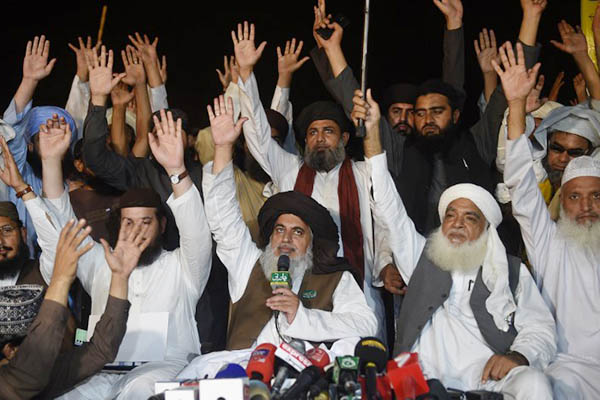 They have called for the assassination of Supreme Court judges, demanded a mutiny in the armed forces and have vowed to wipe out the Netherlands with nuclear weapons.

In just a few years the Tehreek-e-Labaik Pakistan party has become one of the most powerful groups in Pakistan, dictating terms to successive governments and paralyzing the country at will with violent protests.

Led by firebrand cleric Khadim Hussain Rizvi, the far-right religious party has weaponized the ultra-sensitive blasphemy issue in the Muslim-majority nation, sparking fears that Labaik is radicalizing the country’s heartland and opening a dangerous new chapter in Pakistan’s brutal confrontation with extremism.

Here’s a rundown of why the group is so powerful and how they have been able to harness the extraordinarily inflammatory charge of blasphemy to increase their following across Pakistan.

Where did they come from?

Labaik began as a faction demanding the release of Mumtaz Qadri—a bodyguard who gunned down Punjab governor Salmaan Taseer in Islamabad in 2011. Qadri later cited Taseer’s calls for reforming the country’s blasphemy laws as his motive and was hanged in 2016.

Labaik formed an official political party—earning more than two million votes and two provincial seats in this year’s general election, in what analysts called a “surprisingly” rapid rise. By making blasphemy the party’s central—and arguably only—talking point, Labaik have positioned themselves as the protectors of Islam, effectively painting their foes as enemies of the religion.

“They have presented themselves as the sole flag bearers of the blasphemy issue,” said columnist Khurshid Nadeem. “Violence is a currency which sells in today’s times… they have proved that they can also kill and be killed for their cause.”

What are they known for?

Labaik entered the national consciousness in 2017 when supporters blockaded the capital Islamabad with violent protests for several weeks, over changes made to the oath taken by parliamentarians, which the group deemed blasphemous. At least seven died in the violence.

The protests succeeded in forcing the resignation of the country’s federal law minister in a military-brokered agreement that saw Labaik virtually absolved of any wrongdoing. Since then, they have strong-armed Prime Minister Imran Khan’s newly minted administration into firing an economics adviser for belonging to the persecuted Ahmadi religious minority.

The group was also linked with an assassination attempt on former interior minister Ahsan Iqbal in May, although it distanced itself from the incident. Its leader Rizvi reportedly told journalists that if he took power in the nuclear-armed country he would “wipe Holland off the face of the earth,” over cartoons of Islam’s Prophet published there.

What about Aasia Bibi?

Labaik flexed its muscles again last week, when hours after the country’s Supreme Court quashed the blasphemy conviction of Aasia Bibi, a Christian woman, its followers flooded the country’s streets, causing gridlock. It called for the assassination of the court’s judges, and a “mutiny” in the armed forces.

Khan initially issued a searing rebuke of the group, but his administration appeared to backtrack days later by striking a deal. “For Pakistani politicians, it’s easier to defy the courts than it is a violent mob that claims to be Islam’s true representatives,” said Omar Waraich from Amnesty International, adding that the government “didn’t want to be cast as irreligious.”

Following Bibi’s release on Wednesday, Labaik accused the government of reneging on the agreement and vowed to return to the streets if she was allowed to leave the country.

How dangerous are they?

Fears of Labaik stem from the group’s rising popularity in Punjab’s heartland and their ability to enforce their will on governments with little or no official backlash. Whereas previous extremist movements like the Pakistani Taliban belonged to the minority Deobandi sect, Labaik’s roots in the country’s mainstream religious branch of Barelvi Islam—traditionally thought of as Sufi moderates—has alarmed observers.

“They are radicalizing the people… particularly they are focusing on Punjab and Sindh provinces and have already radicalized a big portion of the society there,” said security analyst Amir Rana.

Pakistan’s security forces remain hesitant to clamp down on religious groups, fearing any heavy-handed move could spark a violent backlash similar to the insurrection spurred by a military crackdown on Islamabad’s Lal Masjid in 2007.

Labaik’s rising power is also of particular concern to Pakistan’s Ahmadi community, who consider themselves Muslims but are seen as blasphemous in most mainstream Islamic schools of thought, and have long been targeted by extremists.